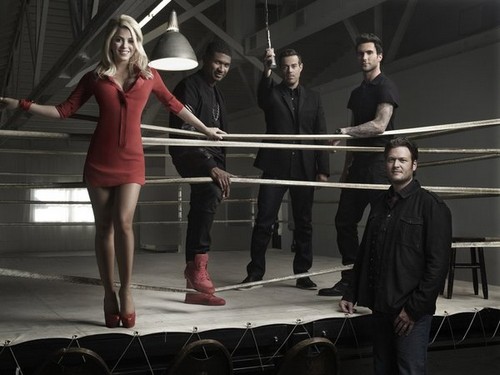 We are down to the top 8 contestants on this season of THE VOICE and the remaining eight artists will sing live tonight, competing for your votes and a trip to the Top 6.    Did you watch last week’s episodes where two contestants were sent home? We did and we recapped it for you here.

On last week’s show the top 10 artists perform live in front of coaches Adam Levine, Blake Shelton, Shakira and Usher for America’s vote.  On the results show America voted to eliminate two artists from any team and the remaining 10 moved on to the next phase of the competition.  The two artists who were eliminated last week were: Team Shakira lost Kris Thomas while Team Usher lost Josiah Hawley.  last week was an emotional night, one combining tears, cheers and amazing performances.

On tonight’s show the remaining 8 artists will take to the stage to perform live in front of coaches Adam Levine, Blake Shelton, Shakira and Usher for America’s vote.  The competition is really heating up and the remaining contestants will have to bring it tonight if they want a place in the coveted Top 6!

Blake Shelton, as well as advisor Sheryl Crow, are set to perform on the Voice this week.  Blake will perform “Boys ’Round Here” on the May 27 edition of the show, while Sheryl will sing “Easy” on May 28.

Tonight’s  The Voice “Live Top 10 Performances”  is going to be an exciting one, which you won’t want to miss. So be sure to tune in for our live coverage of NBC’s The Voice – tonight at 8PM EST!   While you wait for our recap, hit the comments and let us know how excited you are for the new season of The Voice.

RECAP: Tonight’s live show begins with a performance by mentor Blake Shelton. As for the actual competition, Team Adam is up first with Judith Hill performing. She is singing Hashtag by Will I.Am and Adam thinks it’s a risky choice, however Judith has a clear vision for the performance. The audience seems to think that she absolutely killed it. Blake thinks her singing is spot on and he thought her hair was bad-ass. Usher also thinks she did a great job. Adam felt like he was watching a real artist and not a contestant on the Voice.

Team Blake is up next with Holly Tucker. She has chosen the song Done by The Perry Band. Usher thinks she did an incredible job and Shakira loved her sass and attitude. Adam appreciates that Holly’s range is so great. Blake was thrilled with his girl onstage. He thinks she totally owned the song.

Next up we get a group performance by the ladies to Rihanna’s Diamond. Judith and Michelle totally stand out in this number and the over all harmonies are really good.

The Swon Brothers are up next and since they are from Oklahoma we get to see a package about their feelings about the horrible Tornado that struck last week. Blake has them doing an old Eagles song this week. Usher thinks that they did The Eagles proud. Shakira things the classical Eagles harmonies suit their voices. Adam thought there were a few moments that were scary but they ironed themselves out. Blake loves that they continue to grow each week.

Sasha Allen is Shakira’s last hope and only competitor left. She’s going to do Usher’s song Without You which is pretty risky with him right there. I really wasn’t feeling this one but I seem to be in the minority. Adam is still sad that he lost Sasha to Shakira. Blake loves the precision that she uses to hit the notes. Usher thinks she did a great job with his song.

Sarah Simmons is singing Somebody That I Used to Know. Adam believes she can breathe new life into it. Oh my gosh I have chills. Blake praised her and Usher thought her performance was spot on. Shakira enjoyed it and Adam loves all the texture in her voice. He thinks no one has done that song right on the show until now.

Michelle Chamuel is my favorite in this competition and she’s doing Bruno Mars’ Grenade. She’s the last member of Team Usher left standing and I hope this goes as well as the rehearsal looks. She’s just Amazeballs as they stripped down the music and make her voice the focus. Shakira thought it was spectacular and Adam tells her it was so awesome for a million reasons. Blake can’t believe such a big voice comes from a small person. Usher loves her for putting in the work.

Danielle Bradbery is doing a song by The Judd’s and Blake wants her to sing a tribute to her grandparents. Blake worries that if she trips up the lyrics it’ll throw everything off. Usher thinks she’s incredible and Shakira sees star quality. Adam believe she’s a country artist waiting to be born. Blake believes that anyone with ears can hear that she’s amazing.

Amber Carrington is singing Skyfall because Adam wants her to be challenged. It’s dramatic, operatic and she has to sell it. She killed it. Blake thinks it was performance of the evening and Usher thought it was incredible. Shakira thought it worked and the high notes were great. Adam thinks no one has ever done an Adele song justice before her.

Tune in tomorrow night to see who will be leaving The Voice!