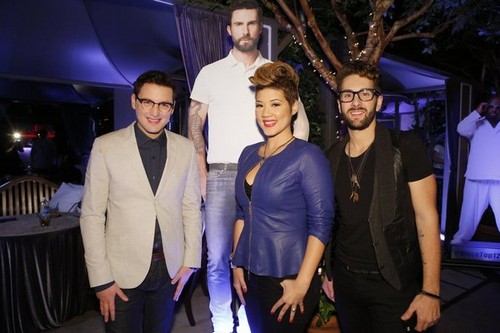 The Voice is really heating up and we are narrowed down to the final 12 contestants competing for the title of “The Voice” and the grand prize of a recording contract.  Each of the judges only have three contestants on their respective teasm – competing on Team Adam Levine are: James Wolpert from Strasburg, PA,  Tessanne Chin from Kingston, Jamaica and  Will Champlin from Los Angeles, CA.

The top 12 have gone through the blinds, battles and knockouts, and artists have been stolen by coaches in order to give them the best chances to win.  The show continues Monday November 11th and the competition moves into high gear as the remaining contestants bring their A-game to impress America.  By Tuesday two more contestants will be eliminated.

Lets take a look at Team Adam’s remaining contestants and how they did last week.  James Wolpert – After attending Carnegie Mellon for two years, James dropped out to pursue music. Despite his family’s hope of re-enrollment, he moved to Pittsburgh, where he was an Apple Store Genius by day and musician by night.

On last week’s show James sang  “A Case of You“ by Joni Mitchell.  The judges loved his performance and had this to say about it,”Christina thought he showed his range and she was totally impressed.  Cee Lo thought he did a great job.  Blake was shocked at how well he did and Adam was impressed and was very proud of him.” If you missed his performance you can see a video of it. [CLICK HERE]

Will Champlin – Will has music in his veins: His dad was a singer, songwriter and keyboardist for the rock band Chicago. Today, Will’s musical inspiration is his one-year-old daughter. Since graduating from the Berklee School of Music in Boston, Will has made ends meet by gigging all over Los Angeles as a musician, including singing backup vocals for Glenn Frey of The Eagles. If you missed his performance you can see a video of it. [CLICK HERE]

On last week’s show Will sang “Secrets” by OneRepublic.  The judges had this to say about his performance, “Christina says that she loves Will and has a special fondness for him; wishing he was still on it. She felt his singing was so touching and emotional; she loved how he hit that last note. CeeLo says that he can’t say anything but great things; he loved the idea of going to the piano and leaving but then coming back to it again. Adam says that everyone is blowing his mind tonight and believes Will has been bouncing around and find it incredible with how much he deserves to be here but also how he can play the piano so well; but his voice is just a really special gift.”

Tessanne Chin – Growing up on the island of Jamaica with musical parents, Tessanne knew she always wanted to be a musician. For three years, she sang backup for reggae legend Jimmy Cliff, but eventually broke out as a solo artist in Jamaica.

On last week’s show Tessanne sang “Many Rivers to Cross” by Jimmy Cliff.  The judges had this to say about her performance, “Christina says that the she knows what it feels to cry tears of joy and believes she is amazing and incredible; but she wasn’t surprised knowing from day one she’d be this good. CeeLo says that they saved the best for last; she is one of his favorites. Adam says he loves CeeLo and his comments; he doesn’t even know how to start talking about her. He believes she is an amazing person and her talent just blows his mind; he is completely dazzled with how great she is and she is flawless.”  If you missed her peformance you can see a video of it. [CLICK HERE]

Team Adam’s remaining three finalists sat down and talked about their biggest musical inspirations and we have the video of it below for you.

At CDL we are all excited for Monday’s live show – who are you rooting for?  Who is your favorite on Team Adam.  Don’t forget to keep coming back to Celeb Dirty Laundry for all your up-to-the-minute The Voice News!