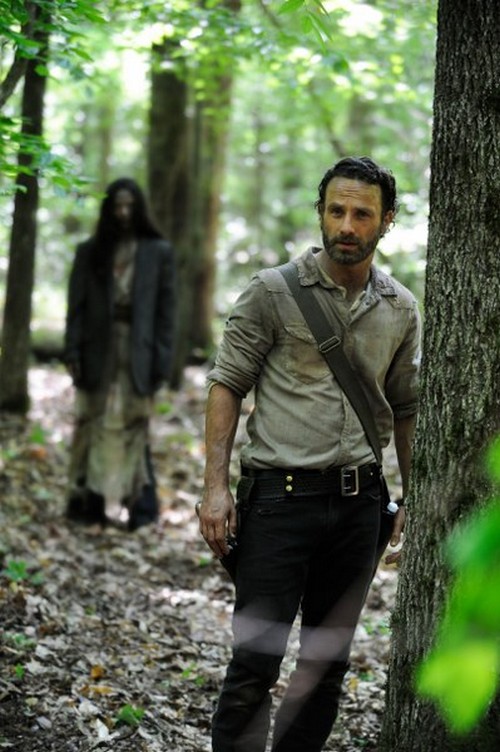 Everyone is already super pumped for THE WALKING DEAD new season and it is finally here is all its gory goodness.  The Walking Dead premiere tonight with the season 4 premiere called, “30 Days Without an Accident.”  Last season’s finale rocked a lot of people’s socks off, but it also left nearly everyone hungry for more zombified action.  If you happened to miss the last episode, don’t worry. We’ve got you covered. Click here for a full recap of the last episode to find out what you missed!

On this season now that the two groups have joined together (Woodbury & Rick’s gang) they have to learn to live together, so that should add new dynamics to the show.  Also Carl has changed at the end of Season 3 — he killed a boy because he said he had too.  Rick is worried about him.  How will Carl change?  Will he become the governor or will he become Rick?

On tonight’s episode Rick and the group are as close to an ideal life as possible at the prison. Will they be able to hold on to humanity in the face of a new evil?

Tonight’s The Walking Dead Season 4 premiere is going to be exciting, and you won’t want to miss it. So be sure to tune in for our live coverage of the new episode of The Walking Dead — tonight at 9PM EST! While you wait for our recap, hit the comments and let us know how know how excited your are for the new season of TWD and what are you hoping will happen this season. Check out a sneak peek of The Walking Dead “30 Days Without an Accident” below!  Don’t forget to come back at 9PM.

RECAP: Rick splashes some water into his face from a barrel, he walks out and goes over to a garden and starts raking the soil; he digs under and finds a gun buried under the ground. He picks it up and looks at the walkers at the fence; Rick pulls out the clip and throws it into the wheelbarrow.

As Rick is working Carl comes up and asks why he wasn’t woken up to help; Rick says he knew that he was up late; Carl asks about the pigs and Rick has no idea why she is just laying there. Darryl walks over to Carol and people are greeting him from afar and says that Rick brought in a lot of people; Carol says that she wants to show him something. A guy thanks Darryl for bringing a deer back yesterday and asks to shake his hand; Darryl licks his fingers and shakes it. We have people stabbing walkers at the fence with sharps objects; there are lots gathering to one side. Carol shows how there is a lot of walkers gathering around the fence now; she mentions how that they can’t keep them off for long. Glen and Maggie are in bed together; Glen wakes up and tells her he doesn’t think she should go today. Glen says she doesn’t have to nor does she should; Maggie says it will all work out. Glen tells her she will stay, Tyreese comes over to one of the girls at the fence and says that he is thinking of going on a run today and doesn’t like killing the walkers. He can’t kill them and wants to do something else; Tyreese then kisses this girl. She tells him to be careful and Tyreese walks off with a smile on his face. Darryl is loading the truck, Beth kisses a guy and he’s the one stepping up to go on the run. Bobby comes over asking to go with them on the run with Tyreese, Darryl, Sasha and Beth’s boyfriend mentioning that he was a medic in the army. Hershel and Rick are planting some plants when they hear a whistle; Michonne rides up to the gate on a horse and is let in. Rick welcomes her back and she gives Carl some comics and hands Rick a razor to shave his face. Darryl is on his motor cycle and says hi to Michonne; she mentions looking around for someone and Darryl asks if it’s truly worth it. Michonne then offers to go with the group going out and leaves with Darryl; Rick tells Carl to go and have fun while him and Hershel work on the crops. Hershel mentions that he looks like a farmer now with all the work he’s done; he mentions that him and the rest of the council want Hershel to talk to Rick and that he must take his gun. Hershel tells him they want him to be safe; Rick goes out and grabs a rabbit. Rick then continues walking in the forest and finds a hurt animal; a girl goes after it and then tells Rick to wait. She asks Rick to please help her.

She begs Rick to help bring the animal back to her husband and that they haven’t eaten in days. Rick walks over and gives her some food; she asks if they have a camp out there and wonders if they could go back with them. They have been on their own for a long time; Rick then tells her that he would have to meet her husband and her. She asks what type of questions, Rick asks if she has any weapons; he goes over and frisks her fast. Rick finds a knife and takes it off her and lets her know that if she tries anything; she will be the one to lose. He hands her back the knife and decides to follow her; the kids are looking at the zombies; Carl goes over to them who are naming the undead. A girl says they are not dead and that they are just different; Carl asks her if she has seen someone die like that. He reminds her they are not people and they are not pets so they shouldn’t name them. Darryl and the group are all at a store to grab supplies. The group is looking around; Darryl knocks on the window waiting for some walkers to show up. Beth’s boyfriend says that Darryl is being kind of some sort of homicide cop; Darryl tells him he’s right and that he is undercover; but he doesn’t like to talk about it whatsoever. A walker come from behind and Darryl opens the door and the whole group goes in; Bob stays out and checks a corpse out. He is just staring at it and then walks in with the others. ON the roof is a crashed helicopter.

Rick is following the girl in the forest and she mentions how the airports were shut down and they were not allowed to fly out; the fourth night the walkers came through and killed a lot of them. She mentions that her husband saved her so many times and that he showed her all the things to do to survive; without him she would be dead. Rick asks what were the things she had to be willing to do; they ate anything they could and even left people behind to make it out alive. She mentions she is like Rick; he says it’s not charity and that having people is the best defense against walkers. Michonne is walking around the store with a cart and notices a zombie cardboard cut out and slices it in half. Glenn is walking around and notices something about babies. Bob is strolling around the alcohol and is shaking his head; Bob then looks over and notices water dripping from the ceiling. Bob takes a bottle and questions taking it; he then leaves it on the shelf but it broke and the whole thing lands on him with all the bottles breaking. The walkers on the roof hear this and start walking over, Darryl comes over to get him and his foot is caught; they pick up the shelf off of him and the walkers are moving. The walkers are falling from the ceiling and Glenn says they should go. A bunch more start falling through the roof.

Rick mentions how his favorite sculpture at the airport was the one of the kids playing leap frog; she asks if he every did the things they had to do. She also asks if they can come back from them; she hopes they answer his three questions. The walkers are dropping in and Glenn is jumped by two; he grabs a gun and pops them in the head. Tyreese starts shooting and then almost gets caught; Sasha and Michonne are stabbing and slicing them; Darryl is running around with his crossbow and Bob is still stuck; he’s asking for help but Darryl is surrounded. Darryl shoots them and Bob is close to a walker. Bob is trying to keep it away from him , Darryl curb stomps the walker and Beth’s boyfriend gets his ankle bitten; the walker is now eating his neck and he dies. The rest of the group runs out of the store. Rick reaches the place with the girls and her husband Eddie; she goes over to some sort of box and she then runs at him with a knife. She starts saying how she kept him and can’t do things like this and wants to be like him; the girl takes the knife and stabs herself. Rick then watches as she dies on the ground, she asks him the questions. Rick asks her how many walkers she killed; she says about 80. He asks how many people she killed; she says just 3. Rick then asks why, the girl then says she doesn’t get to come back and dies. Rick then notices something moving in a bag and decides to just leave.

Carol is reading stories to the kids and Carl sneaks in to listen; Carol then tells them they will be talking about knives and Carl’s friend says he doesn’t feel well or up to it. Carol excuses him and teaches the kids how to stab and slash; Carl shows himself and Carol tells Carl not to tell his father. A lot of walkers are gathering against the fence, much more than before; the pig that wasn’t looking well looks dead. Tyreese comes into the girl he kissed in the morning; he tells her he doesn’t like going out with the groups either. Glenn tells Maggie what happened and how Darryl is telling Beth; Maggie then says she isn’t pregnant and Glenn looks relieved. Maggie says that they couldn’t with all that’s going on, Maggie says their fear is like breathing. Darryl goes to see Beth and tells her about how her boyfriend Zack is dead; she just accepts it right away. Beth tells Darryl she doesn’t cry anymore and is just happy she got to know him; she questions if he’s okay. Darryl says he’s tired of losing people is all; Beth gives him a hug. Michonne finds a route to Macon, wanting to go and look for someone. Hershel tells Rick it’s all fine and there was nothing to do; Hershel tells Rick that his boy came back. Bob goes to bed but Carl’s friend is really sick; he is coughing and goes into one of the rooms with water; he turns on the shower and has it go on him but he drops to the floor. The boy is just laying on the ground with blood pouring of his nose and he has turned into a walker.