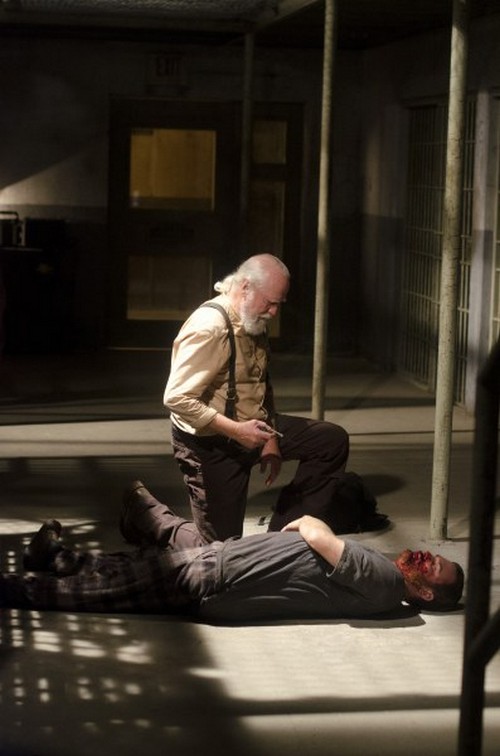 Tonight on AMC THE WALKING DEAD continues with all its gory goodness. Tonight’s episode is called, “Internment” and on tonight’s show the the supply mission faces hurdles; the situation at the prison worsens. If you happened to miss the last episode, don’t worry. We’ve got you covered. Click here for a full recap of the last episode to find out what you missed!

On last week’s show Tyreese, Bob, Michonne, and Daryl headed out to find supplies and they ran into some walkers. Sickness continued to spread through the prison with no cure in sight. Rumor has it at one point the only survivor left not sick will be Maggie. Meanwhile, conditions at the prison got worse.  Rick spoke to Carole about what she admitted last week, that she was the person who killed Dave and Karen.  She tried to excuse why she did it, but Rick was not listening.  He made it pretty clear he did not want her there anymore.

On tonight’s show the group is going to face more enemies, is this the week that the Governor come back.  We know the Governor has to have spies in the prison.  Meanwhile things are not going well in the prison and Hershel is having trouble keeping things under control.

Tonight’s The Walking Dead Season 4 episode 5 is going to be exciting, and you won’t want to miss it. So be sure to tune in for our live coverage of the new episode of The Walking Dead — tonight at 9PM EST! While you wait for our recap, hit the comments and let us know how know how excited your are for the new season of TWD and what are you hoping will happen this season. Check out a sneak peek of The Walking Dead “Isolation” below! Don’t forget to come back at 9PM.

RECAP: Rick is driving and takes a glance down at the watch that Carol gave him, he notices dogs eating a walkers corpse. Rick looks tired and slightly angry; we now see Hershel doing his best to help the sick people within the prison. Hershel is passing out a drink that helps them get much better; he tells Sasha and Glenn that a new rule for the prison is Spaghetti Tuesdays and Wednesdays. Hershel asks Sasha to take over this person they are helping and when she is feeling worse to get someone to take over.

Hershel and Glenn go to the other cells to see how everyone else is doing, they notice one man has died in his sleep; they put him on a stretcher and bring his corpse outside to finish off. Lizzie sees them and ask what they are doing; Hershel tells her they are taking the man to a safer place and that she should go read a book of his. Glenn stabs the man in the head right when he turns.

Hershel goes to see Maggie and tells her that Glenn is tired and resting; he is trying to keep him occupied helping people. Maggie asks to come help but Hershel tells her no and asks about Beth; Maggie says she is fine and is worried about her fathers health. Hershel says it’s hard in here but they are going to make it some how; telling Maggie to believe in them. Hershel tells Maggie he loves her and then leaves to go help the sick; he finds Glenn who thanks him for stopping Maggie. Hershel tells Glenn to go lie down while he works more, Maggie is outside stabbing the walkers in the head when Rick pulls up; she opens the gates to let him in. Rick comes out and asks if everyone is fine; Maggie asks about Carol and he tells her that she killed Karen and David. Rick tells her that he can’t have her here and let her go but to not tell anyone else yet, he asks if Maggie would take her back. Maggie confesses that Rick was right to send her away, Maggie mentions they have to kill the walkers on the fence quick. Rick goes in looking for Carl and finds him and no one is sick; Rick hands Carl the food supplies and tells them they can’t come out yet. Carl mentions that Rick can’t keep him away from what happens, Rick agrees and tells him it is his job to try.

Hershel is checking out Glenn who is helping the man survive; he then walks off to find a fellow doctor; he doctor ignores his help. The doctor says that he can’t be helped and must focus on those who can live because he isn’t going to get out. The doctor shows off the guns he has hidden and tells Hershel they might have to kill some people so keep all the cell doors are shut or the guns will be needed.

Hershel is no locking all the cells and notices one of the people starting to jolt and hit the floor; the man dies in several second. Hershel takes a knife out and notices he’s being stared at; Hershel tells them to go back in their cells. Sasha gets a stretcher over and the two move the dead man out of the cell block. Hershel takes the man to another isolated room, he pulls out his weapon and hesitates to stab the man. He covers the guys face and then stabs him, Hershel is then called on by Rick who witnessed it and Hershel mentions how they are burning the corpses. Rick asks if Hershel is doing okay and he simply tells Rick a quote from the man he just killed; he didn’t want the other people to kill. Rick tells them that everyone sees what he is doing and that he is making a lot of hard choices; Hershel says it won’t be the same after this. Hershel mentions that this is all some sort of test; life is always a test that they have to over come. Rick talks to Hershel about Carol; Hershel then goes around the prison block closing all the cells. Hershel notices someone who died in their bed, he goes and sees that Sasha has passed out. Hershel is trying to help Sasha and dead girl becomes a walker.

Rick and Maggie put logs against the fence to make the fence more stable, Rick gets grabbed by a walker and Maggie cuts the hand off of it. Hershel has helped Sasha and welcomes her back; he tells her she is dehydrated and that she should be careful. Sasha calls him an idiot for coming back but is happy he is, Sasha says she doesn’t believe in magic and honestly thanks him for being so damn stupid. Glenn is helping the man stay alive but feels that his pulse has stopped; Glenn tries to give him CPR but it doesn’t help. Glenn gets really sick and hits the floor coughing very hard.Lizzie finds Glenn and starts calling for Hershel; a walker goes after Hershel and he tries to keep her off, a man comes out with a gun and accidentally shoots a woman saving Hershel after being bitten. Lizzie is leading the walker away and Hershel is trying to escape; he sees Lizzie who is luring the walker.

Rick comes looking for Carl and notices stuff laying around; he came over hearing gun shots. Lizzie leads the walker but then falls over; Hershel runs over and throws the walker over the railing.Maggie goes running and asks to open the door; she can’t open the door with an axe. Hershel leads Lizzie to another room and finds Glenn who is really sick.Hershel finds more walkers and finds the other doctor as a walker and stabs him in the head; he goes inside searching for the guns. Rick and Carl are outside placing more logs against the fence but notice one of them snap; the logs can’t hold much longer and the fence falls over, the two start running away. Rick tells Carl they will have to place the bus against the fence. Hershel finds the shot gun and starts loading it. Rick and Carl pick up guns and head over to the second fence; the second   the two start gunning down the walkers. Maggie shoots a window open and goes into the sick cell block; Hershel starts shooting the walkers away in a secluded room. Hershel is now trying to save Glenn who is incredibly sick. Hershel is fighting a zombie but Maggie shoots the walker in the head, Hershel takes the breathing mask and Glenn is turning blue. Hershel runs over and starts putting the tube in his mouth and is now helping him get oxygen. Lizzie comes in and asks if it’s all over, Maggie says she hopes so. Carl and Rick kill a ton of zombies; they are walking around stabbing the left overs who did not die from the gun shots. Carl notices a van pull up and says everything is going to be okay, Carl runs over and lets them in. Tyreese runs in to see Sasha, Maggie runs up with supplies to help Bob take care of Glenn. Maggie tells Hershel to leave and get some sleep; Hershel walks over into a cell and sits on a bed. Hershel now starts reading a book and begins to cry.

Rick is outside and Carl comes out wanting to help him; Rick is going to see Daryl but says they can wait. Tyreese asks about Glenn and Hershel says he lived the night, Daryl calls him a tough son of a bitch and Hershel says he is. Hershel and Michonne both go and take some corpses away. Rick and Carl are looking throughout the farm. We now see the Governor looking into the prison from outside the front gate.