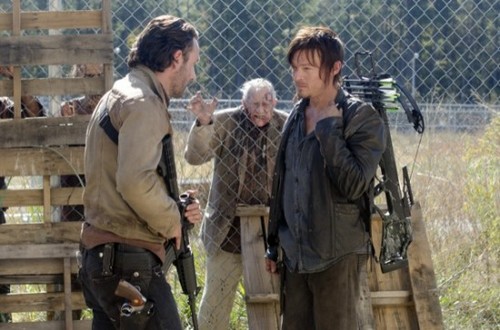 Tonight on AMC THE WALKING DEAD returns with a whole new episode.  We are down to the last two episodes. On tonight’s show called, “This Sorrowful Life” Rick and the group are faced with a serious problem. If they want a truce with the Governor, they will have to make a huge sacrifice. Did you watch last week’s episode? We did and we recapped it here for you!

On last week’s show Andrea finally woke up and smelled the coffee and realized what the governor was. It was Milton who helped Andrea see the light.  Milton brought Andrea to a room secretly being held by the Governor, which can only be described as a torture chamber.  Milton told Andrea to go to the prison and get everyone to leave.  Andreawas shocked but told Milton she has to kill the Governor, Milton did not think she would be able to get close enough and she will only get herself killed.  Seeing what Milton has shown her only strengthen her resolve to kill the Governor.

On tonight’s show Rick has let everyone know there is a war coming.  Daryl asks Rick if there was a way to avoid the war – Rick comes clean and lets the group know that the Governor told him if they gave up Michonne he would let everyone live on peace.  Will the gang sacrifice Michonne?  I doubt it.  Daryl goes to his brother Merle and tells him they cannot do things without people anymore.  Merle lets Daryl know that his people look at Merle like he is the devil.  The rest of the people want to know if Merle is with them.  I wonder how it is going to turn out well for Merle, there are many rumors he will be one of the deaths this season. 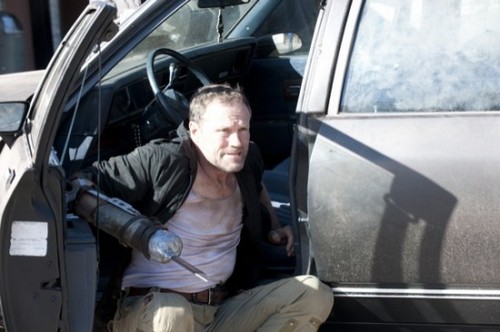 With two episodes left in season 3, we’re all left to wonder how many deaths are going to occur — how many characters, those dearly beloveds of yours, are the show runners going to parade onto the chopping block?

RECAP: Rick heads inside the prison to have a chat with Merle, he tells him that they need his help. Rick asks Merle if he knows why he does the things he does. He then says that if they give the Governor Michonne, he will stand down. Merle knows that Rick didn’t tell the others about the deal. Merle tells Rick about the Governor, how when they went on runs, he would bash people’s heads in. He then tells Rick that the Governor is not going to kill Michonne, he is going to torture her and if he gives her up, he is as cold as ice. Merle admits that he doesn’t know why he does the things he does, he’s a damn mystery to himself. Merle tells Rick that he hasn’t got the spine for this.

Rick is back outside and finds everyone getting the place ready for the battle. Michonne tells Rick that they don’t have to win, they just need to making getting at them so hard that it’s not worth it. Merle is alone with Carol and she asks him if he is with them, he says sure and then says he is there for his brother. Merle is surprised that Carol doesn’t appear to be afraid of anything anymore.

Daryl wants Glenn to forgive Merle, but he says that the way that Merle humiliated Maggie is unforgivable and he cares more about her than himself.

Daryl goes inside to see Merle who is convinced that Rick is going to buckle. Daryl brings up what Merle did to Maggie and Glenn and Merle says he has done worse and his little brother has to grow up. Daryl doesn’t agree, he thinks that they need people right now. Daryk says he only wants his brother back. Meanwhile, Hershel breaks into prayer with Maggie and Beth while Rick is outside and still seeing images of Lori, but tells himself that she is not there.

Rick goes in to see Hershel and says he can’t do it. Merle is with Michonne when he knocks her out, ties her up and covers her up.

Merle is now walking down a road with Michonne, he tells her that he took her because Rick wouldn’t do it, he has to do the dirty work. Michonne still has her hands tied, Merle has also taken her sword and when he asks her why she is not trying to run, she says she wants her sword before she escapes from him. Meanwhile, at the prison, Rick has figured out that Merle and Michonne are gone. Daryl wants to go after them, Rick lets him.

Glenn is with Hershel and he tells him he knows what it means now, the watch he gave him. He goes on to say that he wants to marry Maggie, even if it doesn’t last long, Hershel give his blessing.

Merle and Michonne are still walking, he is trying to find a car that can get them the rest of the way and if he succeeds Daryl is going to have a tough time catching up to them. Merle sounds the alarm on the car and walkers start coming from everywhere, Michonne starts screaming for him to get out of the car – when he doesn’t respond, Michonne has to start killing them without a weapon. Merle has one walker that attacks him in the car, he kills it then tells Michonne to get in the car, they race off. Michonne tells Merle that he missed his shot to make a new start and nobody is going to forgive him for this, Merle responds that if she doesn’t shut up he is going to cut out her tongue. At the prison, Glenn sees a walker with a gold ring on and he steals off her, by cutting off her finger of course….all in the name of love.

Daryl finds Michonne, she tells him that Merle let her go. Meanwhile, Merle is in the car and found himself some booze, he sits there drinking and turns the radio up loud. Merle’s music is attracting lots of walkers and just as he is about to arrive at the drop, he lets the car go and rolls out of it unseen. Merle goes commando, the music disguises Merle shooting the Governor’s men, until a walker attacks him and he is found by the Governor. The two get into a fight and the Governor bites two of Merle’s fingers off. The Governor aims and shoots.

At the prison, Glenn is alone with Maggie and gives her the ring, she says yes. Oh how romantic, in he middle of an apocalypse with walkers all around them.

Rick has called on everyone to meet in the courtyard, he tells them that when he met with the Governor he offered them a deal, he would leave them alone if he gave up Michonne. He goes on to say that he was going to do it, but he changed his mind. Now Merle took Michonne to fulfill the deal and Daryl went after them, he has no idea if it is too late and he is sorry. He then says who they are is not his call, it can’t be, he  can’t sacrifice anyone for the greater good because they are the greater good and how they live and die is not up to him. Rick wants them to vote on what to do Rick then takes a look across the prison and sees Michonne heading back. Daryl has finally caught up to where his brother was a finds a bloody disgusting site, Merle has turned and is eating a human. Daryl faces one of the toughest decisions he will ever face, kill his brother or be killed. Daryl stabs his brother in the head, eight or nine times.