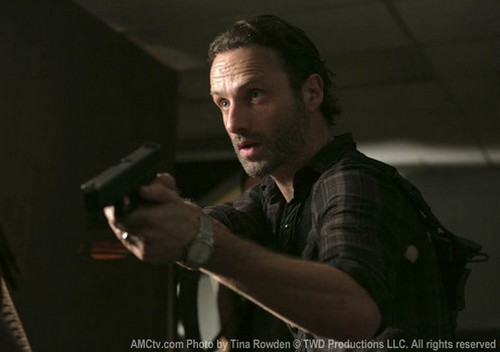 THE WALKING DEAD is winding down to the season finale and there are only three episodes left.  After the governor’s showdown with Rick tonight it looks like the tables might be turning for him next week.  As usual, we will be providing you with the juiciest, previews and teasers out there.  We have a sneak peek video and some insight for you below on what is going on next week.

On tonight’s show Rick and the governor have the big showdown.  Andrea hoped that if the two met more deaths could be avoided.  However, when Rick got to the meeting it was clear that The Governor was not ready to have Rick’s group and his group draw new boundaries.  The Governor wanted Rick to surrender.  The Governor believes that if he does not stop Rick and his group he will look week.

The Governor tried to manipulate Rick into agreeing.  Meanwhile back at the Prison Merle was trying to convince everyone to attack the Governor.  Finally the Governor tells Rick to walk away – but he tells Rick before he leaves he wants one thing, Michonne.  Hershel tries to convince Andrea to come back to the prison with them.  Andrea does not know what to do.  Will Andrea wake up?  Finally the Governor gives Rick an ultimatum he has 2 days to give up Michonne or the war is on.  Did you watch tonight’s show?  We did and we recapped it or you!

Spoiler alert: If you’re one of those people who doesn’t like spoilers, stop reading now! We have some juicy spoilers for you about the season 3 episode 14 of AMC’s “The Walking Dead.”

AMC Official Synopsis: “The Governor chases a fleeing dissenter; while the Governor is gone, a traitor tries to sabotage his plans.”

On next week’s show someone leaves Woodbury and The Governor thinks they are a traitor, we are guessing it must be Andrea.  If she left to go over to Rick, the Governor would want her back because she knows a lot.  But then again, the traitor could be Milton he seemed to be bonding with Hershel on tonight’s episode.  It looks like the pendulum is starting to swing in Rick’s direction.

The war is about to explode and the Governor really wants Andrea on his side, she agrees but I wonder if she is just telling him what he wants to hear.  Meanwhile Andrea tells Milton that she has to stop the war, but Milton tells her he does not think she can.

It looks like Andrea is indeed the traitor, but maybe Milton too.  Andrea tells the people at Woodbury that the Governor is not who they thing he is.  Andrea is becoming frustrated and she decides she has to kill the Governor but Milton tells her she will never get close enough.  It also looks like the tension between Milton and the Governor is building too.  Next week’s episode looks explosive, a lot of madness going on.  Can Rick win over the Governor?  Hit the comments and let us know your thoughts!

The Walking Dead Season 3, Episode 14 “Prey” airs on AMC on March 17th, 2013. Check out the preview videos from episode 12 below and let us know in the comments below what you think!