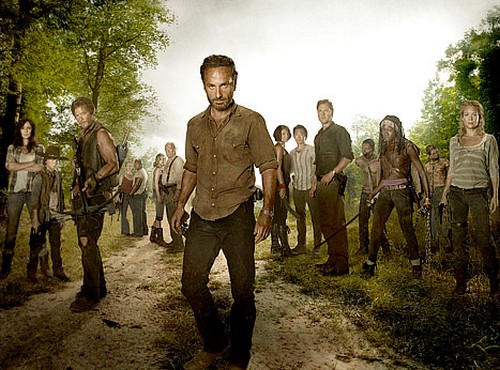 THE WALKING DEAD is winding down to the season finale and there are only two episodes left.  According to Andrew Lincon who plays Rick next week’s episode is going to be epic.  There is a war coming and not everyone makes it out alive.  As usual, we will be providing you with the juiciest, previews and teasers out there.  We have a sneak peek video and some insight for you below on what is going on next week below.

On tonight’s show Andrea finally wakes up and smells the coffee and realizes what the governor is, it is Milton who helped Andrea see the light.  Milton brings Andrea to a room secretly being held by the Governor, which can only be described as a torture chamber.  Andrea is shocked when she sees the room.  Milton tells her to leave and warn Rick so he and his people can leave.  Andrea did not want to leave she wants to kill the Governor.

Spoiler alert: If you’re one of those people who doesn’t like spoilers, stop reading now! We have some juicy spoilers for you about the season 3 episode 15 of AMC’s “The Walking Dead.”

AMC Official Synopsis: “Rick and the others learn that if they want a truce with the Governor, they must make a sacrifice.”

On next week’s show with only two shows left to go, we are rushing towards the finale.  We have heard 2 major deaths are coming before the season ends.  Andrew Lincoln who plays Rick said that the last two episode are his favorite.  One of the deaths is going to have a huge impact on Rick and the gang at the prison.

When Rick returned to the prison from meeting the Governor, Rick told the gang that they were going to war, the Governor wanted them dead.  On next week’s show Daryl asks Rick if there was a way to avoid the war – Rick comes clean and lets the group know that the Governor told him if they gave up Michonne he would let everyone live on peace.

Daryl goes to his brother Merle and tells him they cannot do things without people anymore.  Merle lets Daryl know that his people look at Merle like he is the devil.  The rest of the people want to know if Merle is with them.

Daryl comes over to Glenn and wants to know where Merle is.  Daryl asks Glenn if Merle has apologized yet and Glenn is keeping silent.  Daryl assures Glenn that Merle will make it right somehow.  I don’t see Glenn forgiving Merle anytime soon.  Merle tied Glenn to a chair, beat him and then threw a walker in.  If that was not bad enough Merle took Glenn’s girlfriend Maggie to the Governor and let him terrorize her.   I don’t know about Glenn, but I would not be forgiving Merle anytime soon.

Rick gives everyone a choice they can stand and fight or they can go.  Clearly, Rick and the gang are not considering to give Michonne up.

The Governor also knows that Milton betrayed him, so I would say Milton’ life is certainly in jeopardy next week, he might be one of the rumored deaths.  After Merle told Andrea the truth and what he did in the Zombie pit, the Governor is less than pleased with Milton.  There have also been rumors that Merle may be one of the characters that gets eaten by a walker.  So potentially these could be the two deaths.  But I really doubt it will be Merle.

Who do you think will be the two major deaths this season?  Hit the comments and let us know your thoughts!

Sadly, we are down to the last two episodes next week’s and the week after and then we will have to wait until October 2013 before The Walking Dead returns with season 4.

The Walking Dead Season 3, Episode 15 “This Sorrowful Life” airs on AMC on March 24th, 2013. Check out the preview videos from episode 12 below and let us know in the comments below what you think!