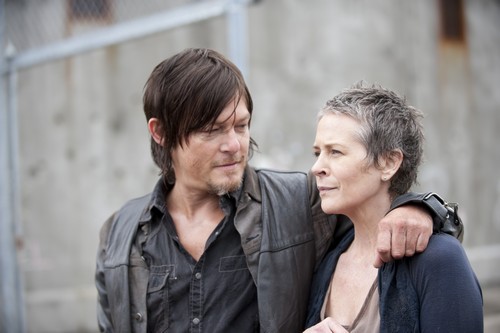 THE WALKING DEAD returned tonight with another stellar episode.  The walker threat continues to escalate and Rick and Carl continue to make steps to fix their relationship.  As usual, we will be providing you with the juiciest, previews and teasers out there.  We have not one but two sneak peek video and some insight for you below on what is going on next week below.

On tonight’s show the group faced a new threat they found someone was feeding rats to the Walkers, my guess is the Governor.  Once all the Walkers found out about the food, they started to push on the fence and Rick had to come up with a way to lure them away.  The young boy who got sick last week walked the prison as a zombie and the group soon realized the boy was not bitten.  There is an infection going around D block and the survivor are confused and scared, it seems to be a flu.  Rick has been working on not carrying a gun and teaching Carl not to use violence.  Tonight he was forced to give Carl his gun back.  tonight was a great episode and a lot more happened.  Did you watch tonight’s episode?  We did and we have a full and detailed recap, right here for you!

Spoiler alert: If you’re one of those people who doesn’t like spoilers, stop reading now! We have some juicy spoilers for you about the season 4 episode 3 of AMC’s “The Walking Dead.”

AMC Official Synopsis: “A group leaves the prison to search for supplies; the remaining members of the group deal with recent losses.”

On next week’s show Rick becomes a man very much forced back into the middle of things and back in the leadership role.  He realizes he has to pick up a gun again.  Andrew Lincoln who plays Rick said this about the episode, “Episode 3’s an extraordinary episode for so many reasons.”

The infection is spreading and as Hershel says, “you breath, you risk your life, the only thing you can choose is what you are risking it for”  Sasha,  Tyreese’s sister is sick and she wants to see Dr. S.  She walks up to Glenn and Hershel and tells them and then leaves and goes back in the cell block with the rest of the people who are sick and isolated.  As she walks by a cell calling for Doctor S, one of the isolated people has turned to a zombie.

The Walking Dead Season 4, Episode 3 “Isolation” airs on AMC on October 27th, 2013. Check out the preview videos from episode 2 below and let us know in the comments below what you think!