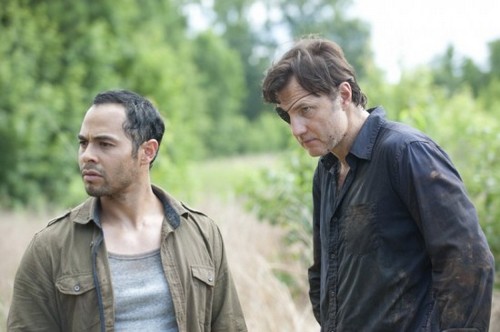 On last night’s season 4 episode 7 of THE WALKING DEAD called, “Dead Weight,” we got many flashes of the Governor washing clothes and Megan looking at the chess board. She is trying to decide what move to make…….hmmmmmmm….something tells me this chess board is about more than just a game…….

Now we start off right where we left off last week. The Governor is looking up at Martinez. The Governor hands Megan up to him with some reluctance. Lily grabs her daughter and holds her. Martinez throws down a rope….

Back to the flash he tells Megan you can’t think forever you have to make a move….yup that chess board is a metaphor….

He climbs the rope. Lily calls him Brian, Martinez looks at him funny but lets it slide.

Back in the flash Megan ask him if she is bad. He tells her no.

Martinez tells him they have a camp two miles away and he is welcome to join. But he has a few rules first off he is in charge and secondly no “dead weight”. Martinez ask Brian if he can live with that.

Flash one last time. The Governor promises that they will be alright. Megan says everyone. He stays quiet, and goes back to washing the clothes. She moves a piece on the board. Megan tells Brian it’s his turn. He tells her he is thinking. The Governor starts looking around.

Martinez, the Governor and a few other guys are out in the woods following a map, hoping it will lead them to more supplies. The Governor senses something and pulls his gun. One of the guys ask him what he is doing. The Governor kind of throws him a watch and see look. There is a body tire to a tree with its head gone it has a a paper posted on it that has LIAR written on it. The Governor has a thoughtful look on his face while the guys behind him talk about it and ultimately decide they don’t give a shit one way or the other, and they have nothing to worry about what so ever. If they could see the Governors face they could rethink that.

Lily is taking care of a cut on a woman names Alicia, who was in the military.

Back on the hunt the guys come to a cabin and a jeep. Also another body without a head this time the note has RAPIST written on it. These words are obviously getting at something or someone. They go in on the porch and find a body this time the head is still attached the note has MURDERER written on it. The Governor is clearly affected by it. I can see why ….all three words describe him,something he did,or something he was going to do. The Governor reaches down and picks up a picture laying next to him, it’s the dead guy with his family. Martinez wants to check and see wants inside the cabin. They go in. Well kind of they throw open the door and then chit chat for a minute. Martinez finally tines around and tell the Governor to get a move on. The Governor pulls
Out his gun and joins them at the door. They go in with flashlight a beaming. The Governor heads down the hallway with the three Amigos behind him. There is a thumping noise and then a door squeaks. A zombie comes running out and the Governor kills it with his flashlight then another one comes in and he also uses his flashlight to do it in. You see the Governor’s face and you can tell the the beast is back from within.

The Governor is looking at the picture the dead guy had next to him. Probably thinking about his own family. Martinez has started a fire so clearly they are spending the night in the cabin. Martinez tells him that if it had just been him he would have left him in the pit, but since he had the little one he decides he would. Martinez Martinez tells him he seems different now and ask him if he is. The Governor says he is. Different as in I’m fighting my inner demons and they are winning different. One of the guys comes in with a trunk full of stuff, and in that stuff is a six pack of beer. Beers all around. One of the guys wants to know what happened in the cabin. Talk eventually leads to a mini discussion about the three bodies with the notes. The Governor squashes by suggesting that shouldn’t read anything in to it. Relax Governor, Martinez is the only one who really has got your number. Now that I think about it Martinez needs to get as far away from the Governor 2.0 quickly as humanly possible. The one guy is named Pete. The other guy has a way with words or as my son says some f**ked up people skills when he tells the Governor he can’t tell if he is winking or blinking. The guy ask Martinez if the Governor has always been like that. Martinez says you should have seen back in his day the man was certifiable. The Governor wants to know what hey all did prior to the zombie apocalypse. The guy with the bad social skills was a ice cream truck driver/ tank driver in the army. Pete was also in the army. Pete ask Governor Brian what he did he says he survived.

Back at the camp the next day the Governor and Martinez are still drinking. Psssst Martinez quit drinking he can kill you easier that way. Lily tells Martinez his camp is the first place she has felt safe since it all started. The Governor is not pleased. Great now Lily is shaving seconds off his life. Martinez is tipping over drunk. Megan comes out to tell the Governor that the roof is leaking. Martinez tells him he should take care of that and then stumbles off.

The Governor has some duct tape and is about to use it to fix the leak when there is a knock knock at the door. It’s Martinez he has a surprise for the Governor. The surprise consist of them playing golf on top of a RV while Martinez continues to drink. While playing hit the ball Martinez talks a lot. You can see with each passing second the Governor is getting more and more agitated. Martinez tells him now that he is there maybe they can share the crown. Out of the blue, he nails Martinez in the head with a golf club and yells four….just kidding there was no yelling of four. Martinez goes and falls off the RV, more like gets kicked off. This whole time the Governor is kind of going back in forth in his head about what he should do. It’s like the good side is getting swallowed up by the bad side. The Governor drags him over to a pit full of Walkers all the while telling him he doesn’t want to do it and throws him in. So long Martinez. It’s pretty brutal Martinez screams until he can’t scream anymore. Meanwhile the Governor we all have come to know and hate is clearly back.

The Governor is sitting on a bed in the RV crying when his new family comes in. He quickly wipes his face. Lily notices he was shaking and ask what’s wrong. He plays it off and tells her he had a bad dream.

The next day ice cream truck guy informs everyone they found what was left of Martinez in the pit. They all wrongly assume he got drunker and fell in. Pete says he is taking over. Everyone else would like a vote. It pretty much disintegrates after that. Pete then gives a speech to semi rally the troops and tells them they will have a vote to pick someone in the next few days. Once everyone calms down he tells the Governor that
they are going on a hunt.

Out in the woods Pete ask the Governor for help in leading. If he knew what happened to the last guy who offered him that job. Ice cream truck finds a group of 10 people. Pete wants to take them in, ice cream truck wants to take their stuff. Pete refuses to do it. The Governor is not pleased with this development. A few dead squirrels and some cans of condensed milk later the Governor decides to go for a walk and finds the camp they saw earlier full of dead people now, one of which ice cream truck stabs in the head.

The Governor gets back home and tells Lily and Megan to pack some things because they are leaving. He tells Lily they aren’t safe there anymore. They are in a truck in the dark. The Governor stops the truck and gets out to be greeted by a load of Walkers stuck in mud.

Next day they are back at the camp. The Governor is putting on his gun belt. Lily wakes up and ask him what he is doing. He tells her surviving. He heads over to Pete’s RV. The Governor tells him they need to talk. As soon as Pete turns his back the Governor stabs him in the gut and then chokes him to death. Guess they won’t be needing that vote. I’m surprised he didn’t use his flashlight.

The Governor is out at the lake dumping Pete’s body.

The Governor has pretty much taken over the camp. He has people building fences and they burn the Walkers in the pits now. He has all the guns and bullets stored in one place. He tells everyone if they see other people to just avoid them.

That night he circles a spot on the map (the prison). He tells Lily he has found a better place if they are willing to fight for it. She wants to stay right here the m you very much.

Next day Lily sees him cleaning his eye. Megan is running around outside when she is grabbed by a Walker that got loose in the camp. The a Governor shoots it in the head.

The Governor is standing out on the lake dock looking in the water. Walker Pete starts floating towards the surface but can’t get out because his leg is chained down. The Governor looks up with crazy eyes.

The Governor drives his truck out to the woods by the prison. He walks a little ways and then he sees Rick and Carl farming. He takes out his gun. Walks a little further and aims his gun right at Michonne.