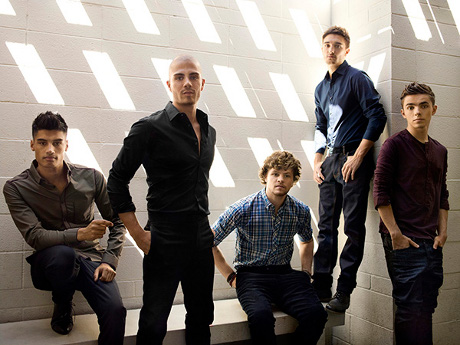 The Wanted, international singing sensation, is headed to E! and preparing to take over the world of reality television. The British boy band is ready to make their mark in the USA, so don’t forget to check out the premiere of The Wanted Life on June 2nd. The show will chronicle the lives of the bandmates as they shack up in the Hollywood Hills and attempt to navigate the craziness that is Tinseltown.

The show features Nathan, Jay, Siva, Tom, and Max and, as is true with any show that Ryan Seacrest produces, there’s bound to be drama. This edgy and rockin’ powerhouse band will try their best to stay true to themselves and to their friendship but . . . who knows how long that will last. Max, Jay, and Nathan will attempt to soak up the limelight while at the same time trying to manage their single lives — of course, they’re probably going to spend most of their time only working, right?

Ryan Seacrest says about the show: “America has a long history of falling for British bad boy musicians, so it’s no surprise that The Wanted are already beloved by legions of fans far and wide. This talented and outspoken English-Irish band are setting their own course to fame and this journey is the foundation of the series. It’s a road that’s bound to include irresistible pop tracks along with plenty of humor, antics and drama behind-the-scenes, which I believe will further ignite fascination and even obsession with these guys.”

And heres a bit more about the show: The Wanted are a band like no other. This trend-setting group of guys embraces their megastar lives and international fame to the very fullest with an unapologetic style. Between the appearances, recording sessions and rehearsals, the boys also juggle sometimes complicated and high profile personal lives and relationships, including the girlfriends of two group members who have decided to tag along to LA.

Don’t forget to tune in on June 2nd. The Wanted Life will premiere directly after the season premiere of Keeping up with the Kardashians.