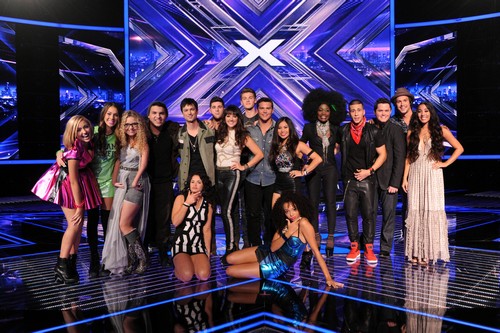 Tonight THE X FACTOR USA returns to FOX after a three week hiatus with a whole new episode. On tonight’s show we will meet the Top 12 who will continue on to next week’s live show. Did you watch the last episode before the hiatus? We did and we have a full and detailed recap right here, for you.

Tonight’s show is going to be an exciting one, which I am not going to miss and neither should you. So be sure to tune in for our live coverage of FOX’s The X Factor USA Season 3 Meet The Top 12– tonight at 8PM EST! Celeb Dirty Laundry is your go to place for all the up-to-date The X Factor News!

RECAP: First up for the girls and we will see where Ellona Santiago came from; she is from California and was born in the Philippines. The first time they moved there they lived in a basement; she appreciates her parents and everything they went through as hard workers. She was disappointed being thrown off the first season with her group but now she is glad to be back; we now see Ellona’s audition.

Demi believes she is a true diva and that she has strong vocals; Ellona is glad to be working with Demi because she is one of her role models. Ellona believes that the four chairs challenge was so hard and stressful; but she is glad to have made it through, she wants to win the X Factor to help support her family.

We now see Rion Page from Jacksonville Florida, she has a disease that has made the joints in her arms weird; her family is very supportive of her and they are incredibly proud of how far she is going. She doesn’t want to be known for her arms but for her voice. Demi believes she had such a refreshing sound from her and really could feel a sort of charm from her.

We now see Khaya Cohen, she is 16 and is from New York City; she has loved music her entire life and singing has been a passion of her’s for ever. Her family suports her in everything she does and her first audition was really hard because she never performed in front of so many people. Demi believed that when she sang her second song you could hear the talent in her voice, she was really impressed.

When performing at the four chairs she kind of forgot the lyrics in the beginning because she was paying attention to the video in the back because she never saw it before. Demi says to never under estimate her because she is on to watch out for.

Next up is the boy and kicking it off is Carlito Olivero and he is from Chicago; he is Mexican and Puertorican. His parents work really hard and it really motivates him to work hard himself; he wants to be able to financially support his family for the rest of their lives.

Paulina knew the first time she saw him that he was special, she believes he has a special charm about him like a star. The four chair challenge was hard for him but he gave the performance of his life; Paulina believes he will surprise people in the competition.

Next is Carlos Guevera, he is 16 and is from South Carolina; he has tourettes and it has been getting very bad as he\s been growing up. Music was the only thing that has been helping him cope with his tourettes, he is so happy to have been given the chance to sing in front of people. Paulina says she liked him right after hearing him the first time. The four chair challenge was the scariest thing in all of his life, Carlos let tourettes define his life in the past; he’s glad to have moved on.

Third is Tim Olstad and he is 24 years old, both his parents are music teachers and have influenced him a lot. He’s always wanted to be a singer but his confidence has always been low; his hands were shaking in the audition but was glad his voice didn’t shake at all. Paulina says his voice just connects with people, the four chair challenge was especially hard for me. He got a seat but at one point was actually told to go home at one point; he was surprised to have been brought back right after. She believes he has to be much more confident in himself and he’ll be amazing. Tim hopes that America loves what he does and he will try his best to make everyone proud of him.

Next up is the over 25’s and first up is Rachel Potter, she is 29 from Nashville Tennesse and she has always wanted to be a country singer. She is now bartending while trying to go out for this dream; she auditioned in mind that it would decide whether it was truly meant for her. Kelly says she is a beast and that she is without a doubt a power house with her vocals. In the four chair challenge she wasn’t feeling good and was very pressured; she heard boo’s in the background and was close to crying. She did not think she was going to go through, Kelly believes that it wasn’t the best but knew she deserved a chance. She is so excited for the opportunity and is prepared to win the X Factor.

Next is Jeff Gutt and he is from Detroit, he is a single dad and his job is singing in a cover band. He auditioned again in the X Factor wanting to support his son with music which is his passion, he came back after failing last year because he felt like he could truly make it. Kelly believes he has such a good heart and that people will love watching him. During the four chair challenge he gave a performance that impressed Kelly, he wants to prove her that he belongs to be in this competition.

Next is Lillie McCloud and she is 54, she has three children and a proud grandmother. When she was a little girl she always wanted to be a singer, but never got the chance. X Factor has really given her the chance to achieve this long time dream of hers, after her audition she was so surprised to the standing ovation she got. During the four chair challenge she was so nervous the whole time, Kelly believes she is so special and she has one of the biggest voices she has ever heard. Lillie wants to really make Kelly proud and prove that she made the right choice in keeping her in the competition; she refuses to go home.

Now is the groups and first up is Alex and Sierra, they are from Daytona Beach Florida; they are a couple and are amazed that they have made it this far. For the audition they were both very nervous, Simon at first thought they would suck when he saw them but when they sang he was so surprised at how good they were. They were amazed at the audience and their reaction, it made Sierra cry. During the four chair challenge Simon gave them a lot of praise hoping to work with them, Sierra felt like she was lacking at the live show but was glad that they both made it.

The next group is Sweet Suspense, they are a group of three young girls; they were formed up by Simon and can’t believe how close they have gotten now after only knowing each other for weeks. They were so surprised when being told they didn’t make it but so glad to have been formed as a group together, they really appreciate what Simon did for them. They want to make Simon proud and prove that his choice was not a mistake.

The final group is Restless Road, they were another group created by Simon; he decided that a country group would be great. Simon says the groups was a no brainer and that he had this strange feeling that they would work; he believes their first performance together gave him chills and has a feeling they will become a sensation. The boys really want to prove to Simon that he’s decision was no mistake and that they can win this show.