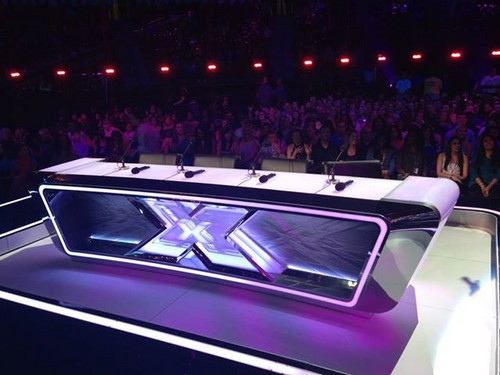 Tonight THE X FACTOR USA returns to FOX with a whole new episode. On tonight’s show the auditions continue  as more hopeful singers perform for our judges Simon Cowell, Paulina Rubio, Kelly Rowland and Demi Lovato. Did you watch last week’s premiere Night 1 & 2? We did and we have a full and detailed recap right here, for you.

On last week’s show the search continued for the world’s next superstar hit Denver, CO and Long Island, NY.  The night ended on a magical note with the performance of subway singer Denise Weeks. Single mom Denise took on Whitney Houston’s “The Greatest Love Of All.” Denise started shaky, but once Simon took the track away her performance soared. Denise gave a soul stirring a cappella rendition of Whitney’s hit. Simon said it best, “Guess what? THE X FACTOR has been waiting for you.”

On tonight’s show groups and singers take the stage on the third audition night to impress our judges Simon Cowell, Paulina Rubio, Kelly Rowland and Demi Lovato.  As usual we will get to see our share of the good, the bad and the ugly.

Tonight’s show is going to be an exciting one, which I am not going to miss and neither should you. So be sure to tune in for our live coverage of FOX’s The X Factor USA Season 3 Week 2 Auditions 3 – tonight at 8PM EST! Celeb Dirty Laundry is your go to place for all the up-to-date The X Factor News!

It’s looking like a guy’s night tonight. The first girls up and went without leaving a single impression but then there was the child. How else do you describe a 14 year old boy that was mistaken for a tomboy? None of his masculine features have even kicked in yet but he is a crowd pleaser.

Almost like a Black Justin Bieber. The preteens will love him and everybody else will wonder why he’s up so late past normal curfews. However he only gets three “yes” from the judges. Not because he wasn’t good enough but the Latina Paulina is off doing a concert. So basically everyone is stuck with three judges and one of them is Simon. Sounds familiar?

Before contestants only needed three yes from the four judges but now they have to please everyone or go home!

Groups seem to be the big thing tonight. People love to sing in harmony with each other and it could have been people if anyone in the group could actually sing. Unfortunately its failure after failure until a certain boy band popped up. All night Simon has been calling one act after another outdated but no one can go retro like “ANU”.

They have slicked back hair and wear coordinating jackets that hold a glimmer of too much shine. Obviously someone must have taught them all about Motown. The group that’s actually three brother are all exited and set to sing when they mention they’ll be singing “Valerie” in tribute to their mother. Simon for some reason thought it was ok to state he hates that song before the guys get started. Thanks Simon you lovable jerk you.

The guys did great though. They did a dance and everything. To be honest it sure did entertain the crowd and surprisingly Simon. He liked what they did and didn’t say retro with scorn. That is a concession for him.

With so much already in the guys’ favor can the ladies may a comeback tonight? One should never doubt those southern women so early in the game. Apparently when their singing solo they can knock one right out of the park.

Maybe because Paulina was back that she became a lucky charm. Brandi, say it with a twang, like she does came out onto the stage and just really sweet. Usually that turns Simon off but he must have seen how genuine she was. Still after she started singing there really was no way the judges wouldn’t love her. Simon said she took him to Church. Oddly he did not burst into flames.

In a speedway of yeses here it goes: A couple of solo female singers, some tween guys, and a shocking girl group. Hate it when they squeeze in performance into seconds. No one else get to experience the talent. No the audience at home gets stuck with the worst singer in the world.

Such an New Yorker who traveled with a complete entourage to the competition. He lists the people he loved to listen to as: Biggie Small, Redman, and Tupac Shukar. Only to sing a Leanne Rhimes song so bad that judges tell him he should drop his friends. Seriously, Leanne!!!

Coming up next is the heartfelt story of a 16 year old with Turrets. He’s tried every medication out there but the only thing to help him so far with his syndrome is singing. He has a slight problem keeping his ticks under control otherwise he sounds really good. He does get an all yes. No worries it wasn’t from sympathy he just was that good.

Even if they meet people they like that doesn’t necessarily mean these people are going to get through to the next round. Like the duet that comes on stage. They interesting and definitely crowd pleasers but then they started singing. Several cameras caught crowd members scrunching up their face in disgust. Will people want to the duet on reality TV? Yes! Hear them on the radio? No!

But they did get one yes. It was given after the girl ran up to Simon and molested him. The things people do for a “yes”.

Take one sweet “aw chucks” boy from a small town who happened to bring 70 people with him to his auditions. He had some mild flirting with Kelly before he broke out into good old fashion country music. Did the flirting help? Who knows but he did get moved on to the next round.

Another judge goes missing! This time it’s Simon. He’s not there when they hear from a mousy 15 year old that belch it out like a diva. He would have liked that. He loves it when they surprise him.

He does come back. Just in time to annihilate dreams and welcome back an old friend. Jeff from last season has come back. He changed his hair and gained some weight. It looks good on him but when it comes time to sing he doesn’t sound good. He sang Aerosmith’s “Don’t Want to Miss A Thing”. His main problem was that he tried to sound like Steven Tyler. Simon is truly disappointed. He loved Jeff last year.

Simon gives him another chance to sing. He chose better with the second song and this time he got the four “Yes” he should have always gotten. Simon does warn him he’s picked up some bad habits but they can work through it.

Tune in next week to see who else may come back…