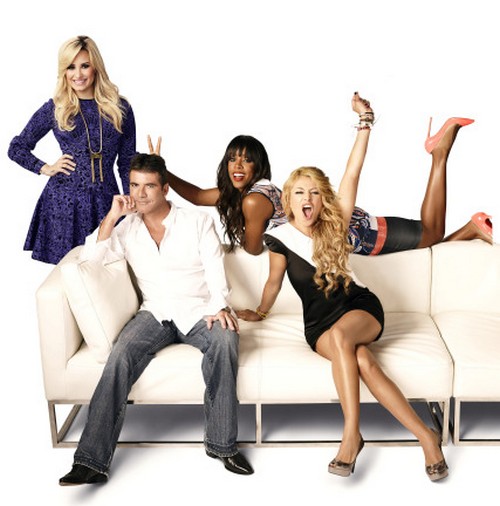 Tonight THE X FACTOR USA returns to FOX with a whole new episode. On tonight’s show the auditions are over and tonight the 40 will be revealed. Did you watch last night’s auditions #5?  We did and we have a full and detailed recap right here, for you.

On last night’s show it is clear the girls are ruling.  The ladies and Simon are openly fighting for the female contestants. Could the other groups rally and put up a fight? Tiny teenage pop stars rule the world, that’s a given.  We saw the last of season 3’s auditions.  My favorite of last night’s performances was Lorie Moore.  Lori is a professional women’s football player, who just happened to be on the 2012 championship team.  Lori gave a soul-stirring performance of Whitney Houston’s “I Have Nothing.” Simon loved it saying, “It was more than an audition, it was a performance!”

On tonight’s show the judges – Simon Cowell, Demi Lovato, Kelly Rowland and Paulina Rubio – must choose the Top 40 acts. After deliberations in Los Angeles, only 10 acts from each category – Boys, Girls, Over 25s and Groups – will be selected to move forward in the competition, and the category assignments will be revealed to the judges.

Tonight’s show is going to be an exciting one, which I am not going to miss and neither should you. So be sure to tune in for our live coverage of FOX’s The X Factor USA Season 3 Top 40 revealed – tonight at 8PM EST! Celeb Dirty Laundry is your go to place for all the up-to-date The X Factor News!

RECAP: First up to audition tonight is Neil Macomber and he is 45, he wants to make his positivvity contagious; he really feels like today is his day and that this will change his life.

Simon says that he’s honest and it was like something from an asylum and his eyes and smiles scared the hell out of him; it’s like he’s a murderer who sings. All the judges give Neil an obvious no because he sucked. Next up is a bunch of girl groups that impress the judges completely

We see an amazing country singer and a man who looks like Santa Claus that puts a smile on their faces.

Next up is Victoria and she has a big family with several children; she is taking care of all of them herself and wants to make them proud.

Simon says that he was not expecting that at all; he thinks he knows her story from singing that song and felt it was amazing. Paulina loved her raspy voice and felt her pain and love for her family. Demi says it was so unique and felt the pain. All of the judges give Victoria and obvious yes.

The last person to audition of today is Keith Beukelaer who auditioned on America’s Got Talent years ago and he’s back as a rapper on the X Factor; he wants to show that he can win this competition.

Keith had the everyone dancing but Simon sat displeased; Demi gives Keith a yes and Paulina then gives him a yes Kelly gives him another yes. Simon says that he will give him a yes as well; since he likes big butts.

All the acts were brought to the next round of the show and this year there will be no boot camp; they are going to now pick 10 of each group to perform in the brand new elimination round. The judges are now going to decide on 40 acts out of 220+ people who auditioned.

The first girl through is Khaya Cohen second is Bree Randall, third is Jamie Pineda, Fourth is Simone Orres, Fifth is Rion Page, Sixth is Danie Geimer, Seventh is Rylie Brown, Eigth is Primrose Martin, Ninth is Ellona Santiago, last of the girls is Ashly Williams.

The judges called back contestants they said no too and tell them they didn’t pick these great artists could be something special as a group of three instead; there are three new groups now in the competition.