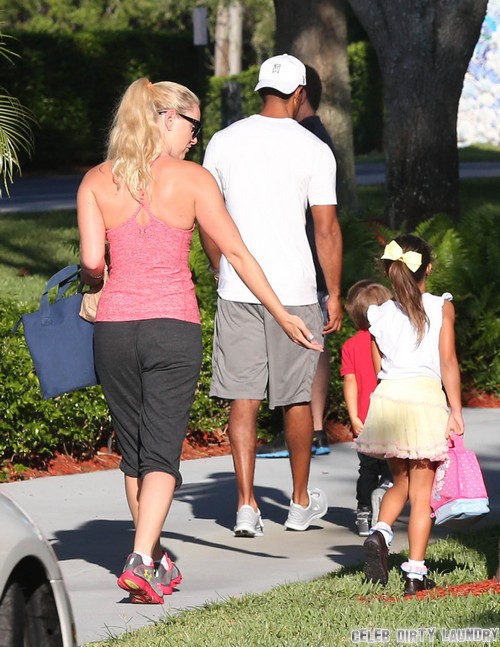 Either things are going extremely well between Tiger Woods, and his Olympian girlfriend, Lindsey Vonn, or someone’s doing a bit of premature wishful thinking!

Lindsey told the New York Times that the couple talk golf after Tiger does his rounds, but she’s more of an interested ear, than an active participant in the conversations, saying: “… mostly I listen. We really are normal in that way. Lots of people go home ad talk to their wife or husband about their job. That’s what we do.”

Having only been together three months, the ‘wife’ comment may come as bit of a surprise to Tiger who’s hardly a wet week out of his high profile marriage breakdown with Elin Nordegren, following a string of affairs.

Apparently wary of keeping an eye, Lindsey has become a something of a permanent fixture at golfing competitions, where she stands by, casually watching her man at work, although, after his past indiscretions, maybe she’s just cautious about leaving him out of her sight at all…

The Olympic skier is keen for people to note that she’s more than just a golfer WAG, telling the Times: “… I’m not just Tiger’s girlfriend. I’m a successful athlete. I’m Lindsey. I have my on career and my own life.”

And she’s not lying! The four-time World Champion skier is more than a sideline fixture; she’s currently in the middle of training for the 2014 Winter Olympics in Russia, a fact she feels many people seem to overlook in favour of focusing on her relationship. That being said, the athlete insists it’s “worth it” to be with Tiger.

For someone who appears so fiercely into her independence, one has to wonder about her seemingly eager attitude towards donning the title of “wife“. Perhaps it really was just a slip of the tongue, a figure of speech, or maybe she’s hinting at something she knows that we don’t. Watch this space!