Tim McGraw Sexy and Sober At 45: How He Changed His Life (Photo) 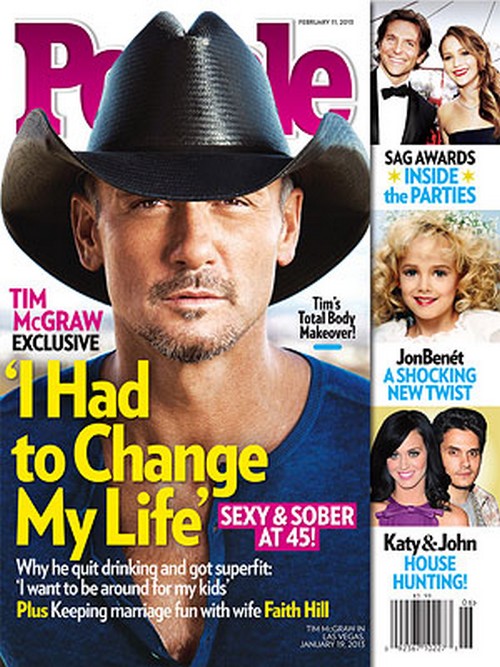 The current issue of PEOPLE MAGAZINE features the cover story, “Time McGraw – I Had To Change My Life.”  This week’s cover story features an exclusive story about Country singer Tim McGraw.  Tim who has been married to singer Faith Hill for 16 years spoke to the magazine about what he considered his drinking problem.  “I drank a lot from my point of view and I needed to stop.”

The couple have three daughters: Gracie Katherine (born May 1997), Maggie Elizabeth (born August 1998), and Audrey Caroline (born December 2001).  Tim says he quit drinking and got super fit because, “I felt quitting was something I needed to do. I didn’t feel I had any moral high ground with my kids in the long run.”

So Tim decided to dump the drinking and replace it with weight training and sports.  It has all paid off for Tim, who is now 45 and sexy.  The magazine has all the exclusive photos this week  of Tim’s total body remake to prove just how great Tim looks.

Not only did Tim stop drinking and get in shape so he could be around for his daughters, but he did it for his wife Faith.  This week we will find out the secrets of how Tim keeps the fun in his marriage to Faith.

To find out all the details of how Tim got super fit, see all the exclusive photos of his new body and learn how he keeps his marriage to Faith Hill fun, pick up the current issue of People Magazine on stands Friday!