Toddlers & Tiaras “A Glitzy Life For Me Pirate Pageant” REVIEW 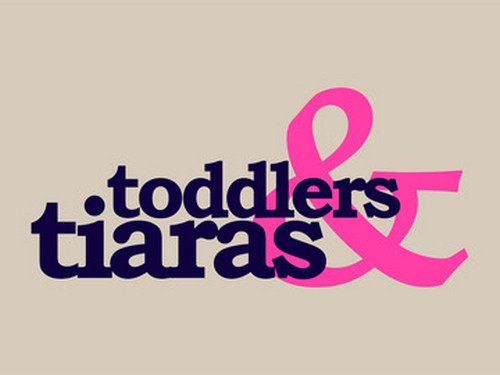 Last night was an all new episode of Toddlers & Tiaras called, “A Glitzy Life For Me Pirate Pageant.”  The opening sequence shows a girl shrieking as a camel puts his head in the moon roof of her mother’s car. In the next shot we see Paeytyn throwing a fit over not wanting to wear a flipper. We then see Eleisha’s mom looking for her because she is missing.

This episode will focus on Pirate performances from the contestants. This people putting on this pageant want the contest to be fun and sparkly but not have the girls dress as mermaids for example. The crowns for this pageant will feature a pirate mixed in with the all the sparkles.

The first contestant we meet is from Killeen, TX. The shots of inside the house show it is very messy with clothes everywhere. We see a mom walking into her daughter’s room with a dress. This is 5 year old contestant Eleisha’s bedroom. Her mom’s name is Beth. Eleisha has been in 3 pageants but has not won and crowns. She won trophies for 2 pageants and a pixie stick candy for another. Beth feels Eleisha’s gowns have held her back in her previous pageants. She decided to by a new black and gold gown for this contest. Beth is a single parent whose money is tight but she decided to spend the money on this new dress for Eleisha hoping it will help her win a title in the Pirate pageant.

We next go to Bridge City, TX and we are introduce to 8 year old Daisy, the self proclaimed Dancing Queen. Daisy is rehearsing at home with her mom April. Daisy is known in the pageant world for her dance ability and had previously won Ultimate Grand Supreme. April says Daisy’s new dress cost $3,000, which is more than she spent on her own wedding dress.

In Monroe LA we meet 4 year old Paeytyn. Her mom Boughman says her daughter is a handful but a blessing. Paeytyn is shown drawing on the walls of her bedroom with crayon and enjoying herself. Paeytyn has been competing in pageants since she was 1 ½ years old and won her first award 1 ½ years ago. Boughman explains that her daughter does what ever she wants to do when she wants to do it. Paeytyn, however, is a different child when she is on stage. She thinks she is Justin Bieber’s wife and plays with a Justin Bieber doll.

Next we go back to Eleisha. Beth says her daughter is subdued and needs to learn to be more outgoing. Beth is helping Eleisha overcoming fear by taking her to Topsey Animal Park to feed the animals. A camel sticks his head into the moon roof of the car looking for food and Eleisha is too scared to feed him.

Back in Bridge city, TX we see Daisy on her way to dance class. New April has hired a new dance teacher for Daisy to help her with competing in pageants. It helps Daisy be polished with her performances. Daisy learns a snake dance move from the new teacher and masters it.

We next go back to Killeen, TX to check in with Eleisha. Beth says that her and her children are interested in pirates so this pageant is right up their alley. For her routine Beth helps Eleisha come up with a basic routine to music and has Eleisha adlib the rest of her performance.

In Monroe LA Paetyon’s grandmother Wanda has come to the house to show her the dress she will wear for the beauty portion of the pirate pageant. Boughman says she has spent $100,000 so far on dresses and whatever Paeytyn needs for her pageants. Wanda helps keep the cost down by making a lot of Paeytyn’s dresses. We get to see Paeytyn in full tantrum mode when her mother and grandmother try to get her to try on her new dress. She cries and screams as her Boughman and Wanda plead with the child to try on the dress.

After our introductions to the girls we now go to the It’s a Glitzy Life Pageant in Texas. The director talks about Paeytyns beautiful gowns, Daisy’s amazing routines and that Eleisha is new to pageants.
The next scene is Paeytyn crying while Beth is putting curlers in her hair. Paeytyn complains she is sleepy and Beth explains sometimes Paeytyn wakes up on the wrong side of the bed. The tantrum contines as Paeytyn is brought to the makeup artist.

Meanwhile, Daisy is getting her makeup done and false lashes applied. April is nervous is nervous for her daughter but Daisy is not nervous and is cool as a cucumber.

We next go back to Eleisha walking to hair and makeup, screaming and crying the whole way. Beth and Eleisha both express that they are nervous. Tammy Howe is the woman doing Eleisha’s hair for this pageant. Tammy complains that Beth did not follow her instructions for Eleisha’s hair and has a hard time putting it up. Her mom is not a fan of Tammy either, but is using someone new in an effort to give Eleisha a better chance to win a crown.

It’s time to see the girls perform. We first see the Beauty portion of the pageant. One of the judges says what she is looking for is a girl who is facially beautiful and well put together. The girls should have a spray tan, a flipper, certain socks and her dress determines a lot of the points she will earn. Even 1/10 of a point could cost a girl the highest title.
.
As it becomes time for Paetyn to take the stage she is still throwing fit, screaming and crying. She is refusing to put on her flipper. Finally, Paeytyn’s dad gets her to calm down and gets the flipper in her mouth. We see a before and after picture of Paeytyn’s clothing. As she is starting her routine on stage Paeytyn mimics Boughman so she doesn’t forget her routine.

Next up are the 5 year old contestants. Eleishia doesn’t look like the other girls. She does not have a spray tan and it looks like she is wearing less makeup. Her shoes have a little bit of a heel. Eleisha does her routine but walks off the stage early. Beth waves to her to get back on the stage. Eleisha goes back but wanders around the stage. After her performance a judge says she didn’t know what was going om with Eleisha and that as far as the beauty portion of the pageant she needs more guidance.

Next up is Daisy. Her routine is fantastic as is her dress. The judge says about Daisy that she squints too much but also that Daisy is a true pageant girl.

The Pirate wear portion of the pageant is next. The judges are looking for the girl who has the magic touch. We cut to Eleisha is getting ready while Beth is looking for her music. She again says that Eleaisha does her best when she adlibs. She just let Eleishia run with it. Walking to the ballroom Beth realizes she forgot Eleisha’s number in their room. Eleisha runs off and Beth is exasperated looking for her daughter. Beth found her at their hotel room. Eleisha had run ahead of her. Back in the ballroom we see Eleisha do her pirate routine. The audience does not look impressed. The judge says Eleisha’s mom does not know what she is doing yet, and that Beth should help Eleisha more with her routine.

Up next is Paeytyn. She begins her routine by coming out of a treasure chest. She again mimics Boughman in order to get through her performance. The judge mentions that she likes Paeytyn’s dress but that she needs to look happier and smile more.

Meanwhile, Daisy is practicing in her hotel room. April comes in and says the music is not loud enough coming through the sound system. She isn’t sure if it is the CD or the soundsystem. When it comes time for Daisy’s performance the music is perfect. The judge says Daisy smiles during her performance and that Daisy is a professional pageant child.

After all of the contestants perform the judges discuss all of the girls. The previous comments made by the different judges are reiterated.

Now that all of the performances are over it’s time for crowning. For the 4 year old crowning the girls can win Princess or Divisional Supreme Queen. If they do not win one of these titles they will be given an eye patch. If a girl receives one of these eye patches it means she will be eligible for a higher title.

For the 5 and 6 year old girls Eleisha wins first princess. Eleisha is crushed and says she wants a crown, but Beth tells her the pageant is over for them. Beth also says she wants to stick to smaller pageants in the future. Paeytyn will win beauty supreme and Daisy wins Ultimate Grand Supreme.

The episode ends with all of the winners of the pageant standing together with their prizes. We next see the three mothers talking together. April and Boughman brag about their daughters while Beth looks annoyed with the other women.