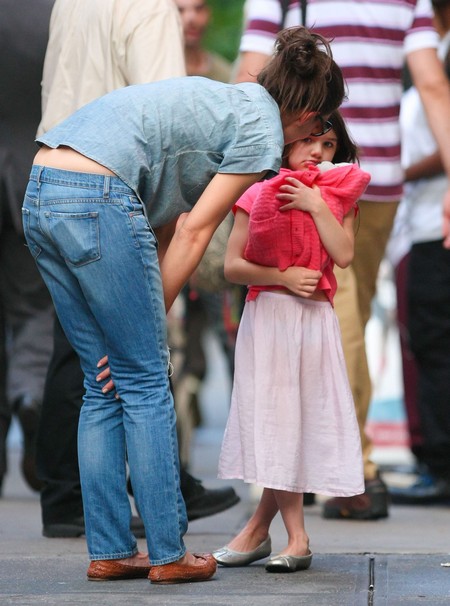 Tom Cruise really dug himself into a hole with this one, hasn’t he? He probably thought that suing the tabloids would make the stories stop, but instead he’s just made himself look bad in the process. The details of his deposition have been leaking all over the Internet, and Tom’s responses to half the questions are so juvenile and defensive that I wonder if he even thought about his answers before he gave them.

Basically, Tom sued several tabloids in a libel lawsuit, claiming that they’re making him look bad when they wrote weekly stories about how he was ‘abandoning’ his daughter, Suri Cruise, in the wake of his divorce to Katie Holmes. Despite the fact that it was revealed that he hadn’t seen Suri for more than three months after the divorce, he still claimed that he never abandoned Suri, and was always there for her had she needed him.

An increasingly defensive Tom pretended as though Suri’s first day of school was not that important, when asked about why he wasn’t there for such a momentous occasion. He claims (via Radar), “I think parents sometimes think it’s (a big day). You know with Suri, if she had asked me to be there, I would have been there. I would have tried to make it work out in any way I could.”

Uh, seriously?! The first day of school in any child’s life is one of the most important days of their life, and parents not only attend, but tend to document this event with photographs, videos, etc. So he’s basically saying that ever other parent is wrong, and HE’s the one who’s right? Also, why on earth would Suri ask him to be there? She’s still a child, and she doesn’t know how to ask for love – she’s not going to ASK him to be there for one of the biggest days of her life, and he’s her dad, for goodness sake. He should know to be there without her asking!

Instead of suing the tabloids for concocting stories [or so he claims], Tom should have left it alone. By suing them and opening himself up to all these questions, he’s proving what the tabloids have been saying all along.