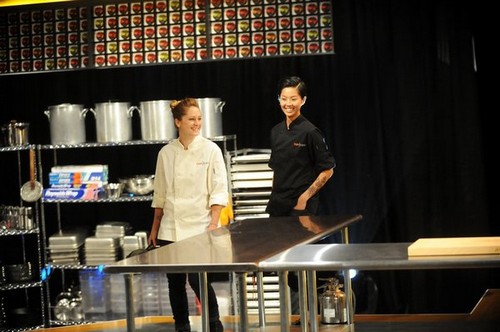 Last night we saw Brooke Williamson and Sheldon Simeon – victorious in the final competition – face the victor from Last Chance Kitchen – Kristen Kish! Cooking at Tom Colicchio’s restaurant Craft, they each had to prep two courses and dessert. With his reputation on the line, Tom begged them “Please, don’t screw this up!”

Sheldon has been keeping busy in Hawaii at Star Noodle in the months since the Alaska challenge. He’s thrilled to be back with his three girls and wife. Sheldon’s dream of a Philippinpseudoephedrineo restaurant of his own in his native Hawaii could happen.

Brooke’s back home and busy being a mom and bouncing back and forth between her two restaurants Hudson House and Tripel. She’s overwhelmed with the business side of running her restaurants and the pull of needing to be a good mom.

Meanwhile Kristen’s been cooking her ass of in the Last Chance Kitchen, putting an end to CJ’s reign and then trouncing all new-comers. Stressed out by Tom’s frenetic expediting, she said “I peed in my pants a little.” OMG!

Some of the best dishes this season from these three (for me) were:

Brooke’s dessert from tonight – the Brown Butter Cake. Tom griped about it, but to me it looked like comfort food gone high brow. I would have loved a giant plate of that!

Sheldon’s Tamarind Soup (aka Sinigang) was a big hit with the judges and I would love to try it. Regional dishes from the chef’s backgrounds are always a treat.

Kristen’s Poached Chicken Breast in the Memorable Moment challenge had me salivating. I’m not the biggest fan of fancy, but this looked and sounded so yummy.

So in the end, it will be the ladies facing off in the finale as Sheldon was sent packing back to Hawaii – if you have to get sent home, being ousted to a tropical paradise seems the place to go.

I’m torn between who I think will win it all – Kristen has such high aspirations to a level of cuisine that is not my personal flavor preference – but she’s technically proficient and uber-creative.  Brooke’s recipes are what I would pick to put on my table – she was cooking pig ear salad on last night’s recipe – amazing!

Take a look back at how Kristen made it to the finale.


Take a look back at how Brooke made it to the finale.

One of the head slap moments for me from this season was Kristen’s unexpected elimination. I feel certain that if Josie had done a better job as a support team member (or if she hadn’t been saddled with Josie at all) she may have won the restaurant challenge and have never seen the inside of the Last Chance Kitchen!

While I would pick Brooke’s food hands down, I am not blessed with a sophisticated tongue for cuisine. I think it’s going to come down to the palates of the judges in the finale. Tom likes fancier while Padma is a fan of comfort food and Hugh is just all around picky! The guest judges could throw it one way or the other even if both ladies kill it – which I suspect they will.

What was missing from the semi-final and may be from the finale is dramatic personality conflict. Sheldon, Brooke and Kristen are polite and professional. Without Jodie blathering non-stop, John fixing blame and trash talking and Stefan being all around bad, it seems too friendly. I’ve got fingers crossed that tensions will get high enough in the finale – especially with the live crowd watching the chef’testants cook – that one of the ladies will snap… Here’s hoping!

Next Wednesday, February 27 @ 10/9c is Top Chef Seattle’s finale and it’s not to be missed!  For the epic season finale, each finalist will cook the best five dishes in their culinary arsenal live in front of a studio audience that includes their friends, families and all previous nine Top Chef winners. In the end only one will be crowned the 10th Top Chef

Will Brooke or Kristen emerge victorious? I can’t wait. My stomach is growling just thinking about it…

Disclosure: I’m required to disclose a relationship between our site and Bravo. This could include the Bravo providing us w/content, product, access or other forms of payment.