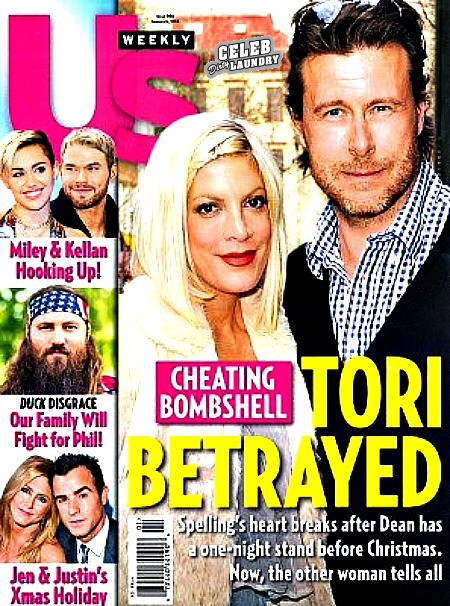 According to a new report by Us weekly, Dean McDermott cheated on Tori Spelling with a woman by the name of Emily Goodhand. The woman tells the mag that Dean told her that he was part of a “sexless marriage” and she, of course, believed him. The confession seemed to jumpstart the affair, which took place at the Fairmount Royal York Hotel after meeting one another at Pravda Vodka House in Toronto. Allegedly, they met amongst a circle of friends. Dean slipped Emily his room key — an invitation. Once their friends left for the night, Emily says she returned to spend the night with Dean.

“He was flirting. His personality is very charming,” Goodhand says. “I was drinking so what he said is blurry. But he was talking about his kids and his work. And when people open up, you feel closer to them in some way. I felt like I could trust him. And we know a lot of the same people, so we had that in common.”

Goodhand admits she made a stupid decision. But apparently she didn’t think it was that stupid because she returned to the hotel the following night, where Dean showed her images from his sex tape (classy date), ordered room service, and cuddled, but she confirms there was no sex involved during this instance.

Emily says that they parted ways when he returned home and they agreed that they wouldn’t explore the fling further, no matter how fun it was. “I’m an adult and I make my own decisions,” she admits. “I’m sorry. I f**ked up.”

So far, Tori or Dean haven’t spoken out on Twitter or through their reps, but I expect some acknowledgment to be released in the coming days — especially from Tori. What do you all think? Can we expect a meltdown in the near future?