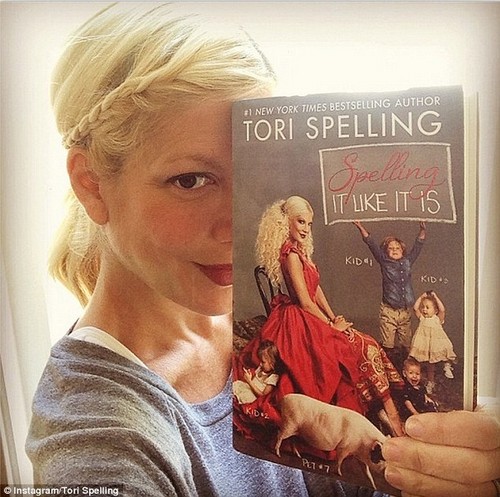 Poor, little rich girl Tori Spelling is just a poor little girl now. According to her new book, Spelling It Like It Is, she is in “financial ruin.” As she put it, “When you grow up silver spoon, it’s hard to go plastic.” Despite having major financial woes, she cannot curb her spending and is experiencing some harsh realities.

The downward spiral of her troubles began when, in 2012, she decided to sell her perfectly nice home in Encino (at a loss) for a different house in Malibu. For normal people, a decision like this would take lots of time and consideration; is the market stable? Why do we need to move right now? Are we trading up? Perhaps we should wait out the bad real estate market awhile. For Tori, who grew up spoiled and needing instant gratification, those considerations simply did not happen. Compounding the problem, less than a year later, Tori put the Malibu house on the market after dumping lots of money into it. When it finally sold, it was also at a loss.

The family then moved into a 9,000 square foot Westlake Village rental they couldn’t really afford and then Tori was hospitalized for placenta previa during her pregnancy with her son, Finn.

Adding more insult to injury the Oxygen network canceled her reality show, Tori & Dean. Rather than get a grip on reality, Tori just kept spending! In one account from the book she says she was in a gas station and went inside to get her children some water, but walked out spending $50 on DVDs, chips, and lottery tickets. The family also traveled and spent oodles of money on things they didn’t really need, and threw lavish, over-the-top parties.

Ms. Spelling says it isn’t her fault she is an, “uptown girl stuck in a midtown life,” because she was, “raised in opulence.” I agree. It isn’t her fault. Her parents did her a gigantic disservice by raising her the way they did.

Of course, since Aaron and Candy Spelling were making scads of money, they should not have been expected to rent a three bedroom house in Torrance, but they could have toned things down a bit, and resisted spoiling their children. There is something to be said for working for what we want, and the offspring of excessively wealthy people never get that kind of life lesson. If Tori had been brought up differently she would be fine right now because she never would have answered the call of her id and sold the Encino house in the first place.

Sadly, at least for awhile, it appeared Tori’s children were going to be on the same path to cluelessness. Hopefully, Tori Spelling’s financial problems have taught her some very valuable lessons that she can teach her youngsters.