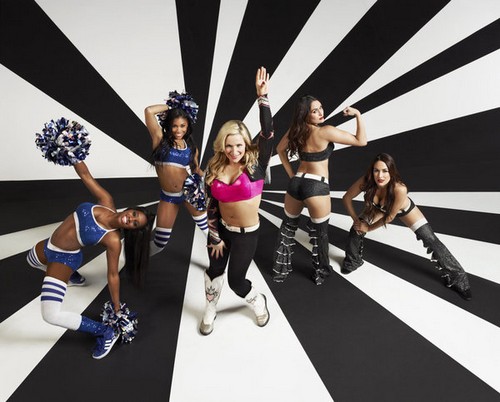 Tonight on E! TOTAL DIVAS continues with a whole new episode called, “Feuding Funkadactyls.” On tonight’s show Jaret, confesses feelings for Nattie.  Did you watch last week’s crazy episode?  We did and we recapped it right here for you.

On last week’s episode Nikki was insecure about her weight when Brie and social media called her fat; Ariane considered getting breast implants while Natalya wanted more romance from her fiancé, TJ.

On tonight’s show Trinity and Ariane’s conflict escalates to the point where they could get fired; Nikki reunites with her estranged father and Nattie’s friend, Jaret, confesses feelings for her.  The Funkadactyls go out go-cart racing with Eva Marie and JoJo on their day off, which leads to a huge argument because Ariane is…Ariane.

RECAP: Eva Marie and Jojo are bronzing each other, then they head into the fitness room to do some workouts. The meet Joe Anoa’l who is a wrestler who Eva Marie says is so hot. Cheryl gets a call from TJ’s mom and gives it to him. Nattie is heading to Calgary and she doesn’t look forward to spending time with the mother-in-law from hell during her birthday week. TJ tells Nattie that his mother, Cheryl, insists that they stay with her.

In New York, Trinity is getting showered and ready for the day, Ariane wants to go shopping.

Nikki and the girls are doing some filming when they start talking about the weekend. Brie is going to visit their father and wants Nikki to go with her but she won’t.

Nattie is so excited to be in her home town and at Monday Night Raw. Later, TJ and Nattie arrive at a hotel and make out on the bed when TJ’s phone rings, it is his mother. TJ wants to go to his mothers and Nattie can’t believe that he is going to leave her in the hotel room.

Trinity and Arianne pose for some photos for the paparazzi, but Trinity is not into it.

John and Nikki are in their house and sharing a cup of coffee, he is teaching her Chinese and she is having a hard time with it, she finds it so confusing. Nikki wants to only learn the dirty words, forget the rest. John tries to encourage Nikki to talk to her father, he thinks they should sit down and hash it out.

TJ, Nattie and Cheryl are at lunch and it’s not going well, you can tell that Nattie is not impressed.

Brie and Nikki are working out, Nikki tells her that maybe she will reach out to their father and make up with him, but she needs Brie with her.

Nikki and Bri are with their Nana but their Papa is no longer their, he past away six years ago.

Nattie is so happy that it is her birthday week, she goes to visit her friend Jaret who owns a tanning salon. She tells Jaret that she wishes that e would have come to the show. Nattie was trained by Jaret because he had a wrestling background. She puts on her bikini and he tells her that she looks amazing, then he sprays her. Nattie has known Jaret for fifteen years and the two makes plans to go to dinner soon.

Nikki and Brie go to their grandfather’s grave with their brother JJ, it is the first time they are there in six years.

Trinity, Eva Marie, JoJo and Ariane go out to play, go karting. Ariane won and Trinity gets upset, the two start pushing each other and calling each other ghetto.

Nattie goes out to dinner with Jaret, he reserves a room and makes it really private for her birthday. Nattie tells him about her worst day ever.  Jaret tells her that she has to ask her if this is what she really wants, if TJ is not treating her like a princess then someone else will. Furthermore, Jaret doesn’t want her with TJ, he has feelings with her and wants a relationship with her.

Nikki is really nervous to meet her dad, Jon. Nikki give him a hug, but feels forced and is not happy about it, she just wants to leave. Nikki tells him that he is selfish and never cares how his children feel. She starts crying and tells him how she felt that her grandfather was more of a father figure than he was. Jon says he hates himself for making her feel the way she does and wants to heal. Joe thanks her for opening up and says he is going to try harder to make things work between them, she feels like weight was lifted off her shoulders.

Trinity hasn’t seen Ariane since their whole blow up; they have to do a tag and Trinity says out right that she doesn’t want to work with Ariane. Trinity says that she would rather work without Ariane and start from the beginning again. A shouting match starts and the organizers for the show tell them to calm down. Ariane steps out of the room and tells Nattie that they have to meet with Stephanie, Ed McMahon’s daughter to which Nattie says is not good.

Ariane tells Stephanie that she thinks they should act professionally. Trinity admits to being physical and pushing Ariane. Stephanie tells them they are going to work in singles competition for the time being, but when they are in public they need to remember they are Divas.

Brian tells Trinity she is first and she is working with Alicia. Ariane is going work with Oxana.

Nikki gets so turned on watching John work, he is all sweaty and she loves his butt. Alcia and Trinity are on, everyone is impressed but she quickly gets winded because she is not used to singles matches. Trinity totally miscalculates and lands flat on her face, in the background Ariane is laughing at Trinity.

Ariane’s turn is next and she doesn’t do too well. Trinity approaches Ariane, they hug and make up, both admit they didn’t do well without each other.