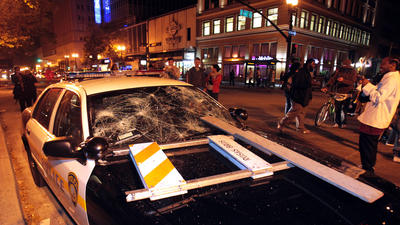 Minutes after the ‘not guilty’ verdict was announced for George Zimmerman in the murder case of 17-year-old Trayvon Martin, many groups across the country erupted into protests. Some were calm, most were angry, but a small minority started getting violent.

In Los Angeles itself, there were fourteen arrests over the chaotic aftermath of the protests, and the chief of police issued a statement saying, “We cannot allow a small group of individuals to not only damage the community, strike fear in the community but also distort the message of so many in this community including on this Police Commission.”

According to reports, it wasn’t just assault and minor vandalism that the cops had to deal with. A neighborhood Walmart was reportedly broken into and vandalized, and several cars and stores had their windows smashed. News footage showed several assaults, including people beating each other on the streets.

Don’t these people realize that by doing all of this, they make it worse for themselves? They’re not honoring Trayvon’s memory, they’re just making a mess. And in Oakland, several protestors even tried blocking the freeway.

I understand that their goal is to draw attention to the trial and what they felt was the unfair verdict, but this not the way to go about it. There were plenty of peaceful protests across the country, and they managed to capture plenty of attention without resorting to assaults, vandalism, and attempted blocking of freeways.

What do you guys think about the violent protests erupting after the George Zimmerman verdict was announced on television? Do you think the protestors should have just stayed silent and attempted a peaceful protest? And when George Zimmerman does go back home, do you think he’ll ever be truly ‘safe’? Let us know your thoughts in the comments.