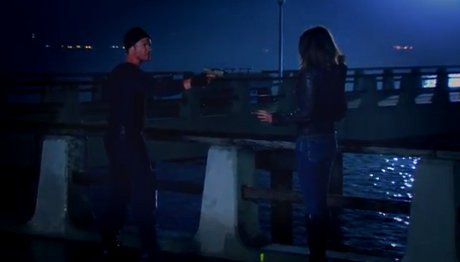 We hate waiting for the return of our favorite supernatural shows, and that’s definitely true for True Blood. The new season will premiere on June 16th and HBO, famous for it’s release of random, borderline pointless teaser trailers, has released a new snippet. It doesn’t offer up much in terms of potential story lines, but the clip does offer up an intense little situation that might just curb the throbbing pain in your fangs. That old vampiric adage, created by the clever minds at the premium cable network, never gets old: Waiting sucks!

In the clip, we see an angry Jason (Ryan Kwanten) completely go off on Eric’s sister Nora (Lucy Griffiths), who was once brainwashed and blinded by the teachings of Lilith — who’s bad, mad, and coming back strong in the form of Billith this season. Jason, with bloody cheeks, waves a gun in Nora’s face. “I am sick of you bloodsuckers brain raping me against my will. Now, you’re going to tell me where Warlowe is or I’m going to put a bullet right through your dead heart,” he says.

Sookie (Anna Paquin) of course comes running into the scene to intervene: “If you’re going to put a bullet through Eric’s sister’s chest it’s going through me first!” she says to her always confused, thick-skulled bro.

Make sure to check out the scene below and let us know what you think. Sounds like they are going to explore the mysterious Warlowe figure this season, and hopefully we’ll get a chance to meet him in the flesh. We saw shadowy figures and specters of him last season, so I’m expecting him to come around.