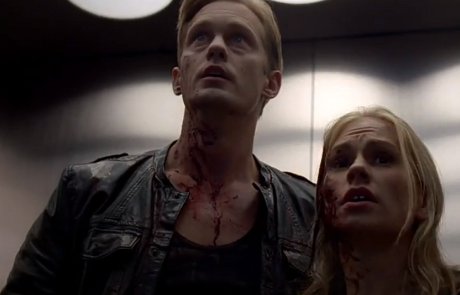 True Blood is returning to us this summer and everyone here at CDL cannot wait. Seriously, we’re trembling in anticipation. Last season saw the birth of Lilith, who consumed Bill, and is now roaming the earth with an evil agenda. But after all that’s happened in the True Blood universe, it seems as if a new group is going to rise from the chaos — and they don’t have a supernatural bone in their body. Just a pretty nasty bone to pick with the vampiric race. Yep, the humans are coming for blood — the kind of blood that explodes all over the place when a vampire is staked in the heart.

In past seasons, the vampires have had to deal with the crazed Fellowship of the Sun, a religious-based organization intent on ridding the world of the “wrong” vampires. So how will these new human forces differ from the Fellowship?

There’s plenty of chaos, craziness, and shirtless-ness in HBO’s recently released trailer, and the new story arch is quite clear: The humans are going to try to eradicate the vampire species. There’s some definite concern amongst the characters we’ve grown to love, especially Pam, who says, “I don’t know, maybe we should be scared. There are more of them [humans] than there are of us.”

Based off the trailer, it looks like we’ll get to see Pam and Tara come closer together. We can also expect Sookie to gain control of her fairy powers this season, and we’re almost positive Lafayette will play some witchy role in the war against humans and vampires. Each season he comes into his magic a bit more so it’ll be interesting to see where his journey leads.

What are you looking most forward to in the upcoming season of True Blood? Make sure to check out the trailer below and let us know your thoughts in the comments section below. Season 6 premieres June 16th.