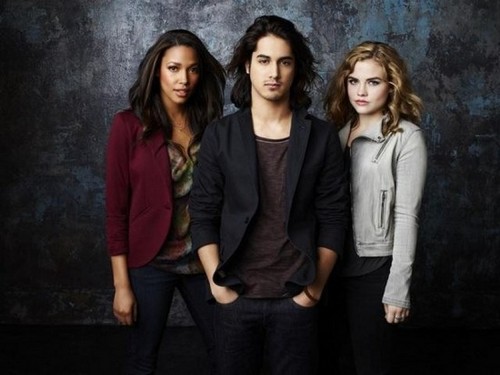 On the last episode Danny and Jo try to ease things over so they can be friends by getting their parents together for dinner. Lacey has a hard time dealing with the loss of her friend Regina. Oh and Danny gets in a fight with Lacey’s boyfriend Archie.

Tonight’s show starts with Lacey, Archie and her friend whose name I can’t remember practicing lines for a play. Jo is chilling in a diner with Rico when Danny walks in. The three start trying to figure out what happened to Regina but trying to figure out things about her. Danny decides to try and talk to Lacey.

Lacey and Archie are in the school. They start talking about the statement she has to give the police. She is nervous because she spent the night at Danny’s and nobody besides her Danny and Jo are supposed to know that.

Jo is sitting at the table with her parents the next morning and decides she wants to walk to school instead of getting a  car ride from her dad. Danny is at school trying to talk to Lacey he actually gets a  smile out of her but then her boyfriend walks up and the conversation ends.

Jo’s dad heads over to Danny’s house to try and get a picture of his aunt from his mother but she refuses to let him in. Jo sits down in class and Rico  comments on her almost being late. She tells him she walked to school. Rico tells her walking makes her grumpy. The teacher says a student wants to switch groups. Jo takes her place.

Rico gets Jo’s attention and wants to know what she was thinking by switching. She explains she can’t help Danny if she doesn’t try to get to know Regina’s friends. Danny’s mom realizes the picture that Jo’s dad wants is missing. Danny tries to make friends with Archie and fails.

Lacey is being questioned by Jo’s dad and admits she was with Danny the night Regina was killed. Lacey gets back to school and yells at Danny because she is upset that Jo’s dad already knew where she was that night before she told him.
Danny and Jo are talking about how mad Lacey was at him. They are trying to figure out how to get in Lacey’s good graces. They decide to help with the play. Lacey is still mad.

Jo’s dad is determined to see a copy of the picture of Danny’s aunt. He decides to call the real estate office and see if they have pictures of the house with that picture in them!?!?!

Danny writes another script for the play. He gets to be assistant director and Jo wants the lead in the play.

Danny and Jo are leaving school. They are standing around talking. He wants to know why she wants the lead role. She tells him he was right when he told her she needs to step out of her safe zone.

Jo’s parents are talking he thinks he has a huge lead on the case. Jo’s mom is not happy. Danny’s mom confronts him about the missing picture. He gets mad at her for ratting out Lacey. He looks super mean and scary.

Jo meets Rico at the diner. He is upset that she is late to study. He gets up and leaves.

Jo and Lacey are on the stage. Lacey was impressed by it. Jo thinks she should give Danny a chance. Archie is still mad at Danny. Rico shows up to support Jo at the play. Archie gets mad and leaves so Danny has to step in and do his part. Lacey’s friend changes the PSA message so that it is of Jo the night she was drinking at Regina’s party. Rico runs to the back to turn it off. Jo takes off and Rico goes after her.

Outside Lacey gets on to her friend out in the hall for what she did to Jo. Lacey tells Danny to please tell her she had nothing to do with it. He tells her she should do it herself. Lacey asks Danny what he wants. They get real close but nothing happens. Jo and Rico are walking around and they decide to have everyone in awhile instead of always studying.

Danny runs into Archie and tells him he was right. That he and Lacey will never be friends again. He also asks him to stop calling him psycho and freak every time he sees him. He agrees but tells Danny he will never fit in around there. Danny goes into the office of the athletic director.

Jo’s parents are at home. Her mom is cleaning out the garage. Her dad helps. Danny gets home after joining the soccer team. Him and his mom are talking about the necklace that his aunt had that Regina was wearing the night she died. He tells her he doesn’t have it. She believes him.

Rico and Jo figure out that Archie lied about being at home the night Regina died. Jo’s dad finds a picture of Tara wearing the necklace.