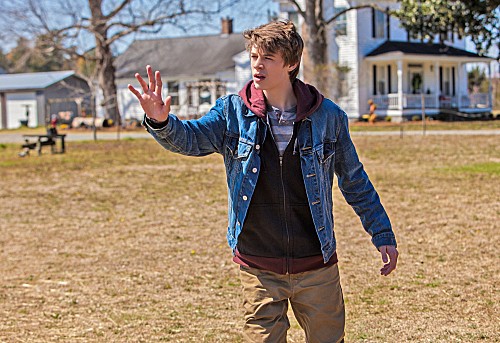 Tonight on CBS Stephen King’s highly anticipated new series UNDER THE DOME premieres with it’s first episode titled “Pilot.” It’s been a long wait for King, he started penning the novel for this series back in the 1970’s and unbelievably it took over 40’s to hit TV, but knowing King, it will be well worth the wait.

Under The Dome is about people in the small town of Chester Mill’s who all of a sudden become trapped by a mysterious transparent dome that completely covers them and cuts them off of the outside world. Families and relationships are torn apart as some members are inside the dome and some are out.

A lot of questions are going to arise for the people under the dome and an important one being, who will be in power? “Big Jim” Rennie (also known as DEA agent Hank Schrader from Breaking Bad, Dean Norris) is the town councilman who owns Jim Rennie’s Used Cars and is eager to gain power when the dome comes down. Strange things have already been going on in the small town and Julia Shumway (Rachel Lefevre) is the local newspaper editor who has been investigating them. Children will be separated from their parents and one of them is Joe McAlister (Colin Ford) who will be forced to raise himself, but he is not the only one. Deputy Linda Esquivel (Natalie Martinez) is the Sherriff’s deputy who is seen on one side of the dome, while her fiance is on the other, while the local radio DJ Phil Bushey (Nicholas Strong) has some deep dark secrets of his own.

Official Synopsis: A small New England town is sealed off from the world by an enormous transparent dome that inexplicably appears. In the opener, the dome materializes and the residents of Chester’s Mill struggle to survive as resources rapidly dwindle and panic sets in.

The producers of Under The Dome have a clear vision of success for this series and we can’t wait to see what they bring us viewers. This is definitely one series that you will not want to miss this summer. Don’t forget to stay tuned to Celeb Dirty Laundry where we will be live blogging every episode all summer long.

Check out the great review of last night’ show below