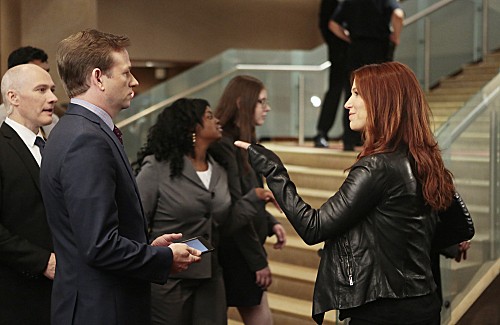 Tonight on CBS UNFORGETTABLE continues with a new episode called, “Day of the Jackie.”  On tonight’s show a businessman’s murder leads Carrie to uncover and assassination plot.

If you have never watched the show it stars Poppy Montgomery as Carrie Wells, an NYPD detective with a rare ability that makes her memory so flawless that every place, every conversation, every joy and every heartbreak is forever embedded in her mind, ready to be accessed at a moment’s notice.

On last week’s show Carrie went undercover with a team of bank robbers when The Major Crimes Section got a lead on the gang’s leader, a notorious thief who rarely showed his face.  Sendhil Ramamurthy (“Heroes”) guest starred as one of the bank robbers.

On tonight’s show Carrie and Al are unable to discern why a businessman was murdered in his hotel room until it’s discovered that his death was collateral damage in a larger plot to assassinate a diplomat.

Tonight’s episode 3 looks like it going to be great and you won’t want to miss it. So be sure to tune in for our live coverage of CBS’s Unforgettable episode 3 — tonight at 9 PM EST! While you wait for our recap check out the sneak peek video below of tonight’s episode!

The show begins with a man entering his hotel room. He finds a bottle of champagne there as well as a woman who says you are back early. He asks her who she is and she replies Jackie. He then tells her that she is in the wrong room. She asks for help with her zipper and he moves forward to help her.

It is the next day and you see Carrie walking on street to get her daily coffee as well as calling in to answer a song on the radio. Her prize is skydiving and she was Al to come with her. She tells him to face her fears. They end up at the hotel and in the room as the man we previous saw. His name was Mr. Dirksen and his wallet and watch are missing. Carrie talks to the hotel manager who reveals Mr. Dirksen was in town overseeing a business deal. Since there was no forced entry Al wants to see the security footage but there are no cameras on the elite floors. Carrie asks for a list of all employees and is put off when the manager only cares about flipping the room.

Back as the station the team learns that there was a separate entrance that special people could go in and there was paparazzi there last night meaning he could have picture of the person who snuck in to kill Mr. Dirksen. Joanne tells Carrie Mr. Dirksen was drugged to death, poisoned. But he was strangled after he was already killed.

The mystery woman, Tina from the night with Mr. Dirksen checks into a seedy hotel. The dog sniffs her bag indicating there are drugs in there.

Carrie and Al go back to Dirksen’s room to walk through what happened. Carrie discovers that that the amenities were out of order, something that is unusual in fancy hotels. She goes with he gut and finds a mobile data-extracting device in the vent. The photos from the vent indicate it was pointed to the room above. Dirksen came back early and must of interrupted someone planting the device. He was not the target. Cherie learns a group called Alpha 5 a military unit from former Soviet Union has access to the drug and the device.

Ms. Hall, the woman in the room above Dirksen, is questioned. When she claims she is staying all alone Al reveals that based on her room service and hotel bill there was someone else staying. After some probing, it is revealed a man named Kevin is with her. Turns out Kevin works for the UN and has been guarding a man from West Africa up for a Nobel Peace Prize. Turns out this guy, Okoro Dimka as been a target before because he is all about busting the diamond industry.

At the seedy hotel the clerk knocks on Tina’s door and see’s her assembling what she tells him is a plastic riffle. After a little thought she invited him in so the two can get high. On her computer is profile on Dr. Okoro Dimka.

Carrie and Al go to talk to Mr. Dimka to let him know his schedule has been compromised. They want him to cancel his appearances but he won’t do it, he won’t live in fear. His speech at Hofstra will be seen across the world. He agrees to move everything but his speech.

Jay is able to get the paparazzi pictures and compare it against the Alpha 5 group and it brings up the picture of Tina, who is really Jackie a lieutenant in the former Soviet Army. While they learn that you see Jackie at the seedy hotel injecting something into a bottle and a shot of the desk clerk dead in her room.

Carrie and Al do some research on Jackie. Even though everything has been moved Carrie and Al want to set up a sting to a café she thinks Dr. Dimka will be at. Her MO suggests she likes smaller intimate places to execute her killer plans. The sting is set up and Carrie sees her, even though she is dressed like an old woman. Jackie runs out sticking a man in the heart with something as a distraction. Carrie follows but is in the restaurant can’t get out the door. The two women lock eyes.

Soon Carrie learns from Jay about the seedy hotel clerk being dead. Jacqueline gets set up on a roof with a sniper gun and looks at some people playing in the park. She has her eye on a black and white kid playing football she takes a shot and hits their football.

After learning about the desk clerk Carrie asks Joanne about any unusual deaths in the last 24 hours. She goes through the guys she has and when a guy from a café is talked about something is trigger in Carrie. She and Al head to the café to question a worker about Jackie, who was there a couple of days before. She was alone and requested the corner table. They two access the computer and find the schematics for the theater at Hofstra as well as journalist credits. Looks like Jackie is going to pose as journalist to get close to Dimka.

It is time for Mr. Dimka’s speech and it is craziness at the theater. Carrie, Al and the rest of the team are out in full force. They learn Jackie is coming as Andrea Westin a reporter from The Post. Jay calls to say the room at the seedy motel was flawless. Carrie realizes that they are wrong about the plan, Jackie planted the napkin to throw off the cops. Al soon learns too when the real Andrea shows up. Carrie scans the theater and notices a whole through the sign in the catwalk. Soon Al comes in scanning the room for Carrie. On the catwalk Carrie finds Jacqueline and knocks the gun out of her hands. The two women fight Carrie gets the upper hand and pulls her gun. Jackie smack talks her then drinks something out of a ring on her hand that kills her.

Outside when a dog that Carrie just saw dead comes running up she realizes Jackie only took enough of the medicine to make it seem like she was dead. Carrie and Al learn Jackie not only escaped out of the ambulance but managed to get on a plane at JKK out of the country. Carrie is not happy even though they saved Dimka.