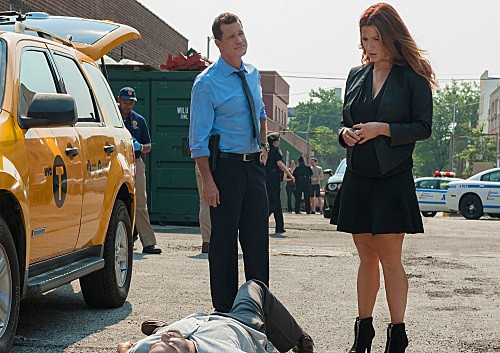 Tonight on CBS UNFORGETTABLE continues with a new episode called, “Past Tense.”  On tonight’s show Carrie and Al search for a soldier who brings his war home with him.

On last week’s show When the scientist who helped Carrie understand her memory abilities is murdered, she must track down other people with the same skill in the hopes that one of them holds the key to finding the killer.

On tonight’s show Carrie and Al’s latest case – the murder of an Afghani cab driver – has the potential to turn into a matter of national security when it’s discovered that the victim was a government informant.

Tonight’s episode 5 looks like it going to be great and you won’t want to miss it. So be sure to tune in for our live coverage of CBS’s Unforgettable episode 5 — tonight at 9 PM EST! While you wait for our recap check out the sneak peek video below of tonight’s episode!

A seemingly mysterious man caught a cab. He made sure to always have his face down even whilst in the cab. He reads the cab driver information and he apparently finds this stranger interesting. The cab driver had answered his phone and began to speak Arabic. The stranger also knew Arabic. In the ancient language the stranger implies a threat towards the cab driver.

In the meantime Carrie is just finishing wiping the floor of the courtroom with the defense attorney when she gets the notice about a cab driver shot dead. The cab driver was an informant in an active terrorist investigation. The man was pulled out of his car and executed in broad daylight in fill view.

Al has already has the team pinned down two suspects. Both with terrorist ties. Al and Carrie go to where the cabbie last picked up his customer. Carrie finds the location odd. There aren’t any national monuments anywhere around. So why would a terrorist be waiting in the area?

Jay and Cherie find out from the cabbie’s wife who he was last talking. A best friend named Mo. Before they leave though the wife is confused why her husband was killed. She didn’t know her husband traded information for a green card. He did to get his family away from Afghanistan.

Al and Carrie go to speak to Mo where they at least get one interesting piece of information. Mo had heard the passenger speak their language. To Al this reinforces the terrorist idea. Even though Elliott tried to tell him task force hasn’t got anything from known cells. The reason they haven’t is because they aren’t involved.

Carrie was wondering why the cab had a mark on his forehead. Webster is able to help her identify the mark as being from the cab when the cabbie fell. The position he must have been in is exactly like how American soldiers are trained to detain prisoners. Al wants to be skeptical but Jay finds out that weapon was a military issued berretta. The killer was a soldier. And Al’s “suspects” as it turned out both had alibis.

Carrie finds a John. She traced him to a Veteran’s aide center. John had a traumatic brain injury while he was deployed. The injury caused memory issues. Because he can’t remember he tends to create delusions to comfort himself. The clinic is not far from when John caught his cab. Another thing to know about John is that the center takes urine samples from the soldiers. They have certain rules concerning sobriety. On the day he executed a man; John was on drugs.

John may have killed while he was high but he’s planning a massacre now. He stole an assault rifle from his mentor along with another weapon.

The massacre he has planned is for Mo. Mo is a florist and they have helium for balloons along with wires and what not at his shop. To an outsider it would look like a bomb factory. One of the last things John remembers from Afghanistan was that the people that blew up his friend and injured hum did it with a cell phone. That’s why when the cabbie had answered his phone John had wigged out and killed him. He thinks he’s hunting the people that killed his friend.

He tracked Mo to wedding celebration he was hired to do. He has Mo hostage and the rest of the room cleared. John keeps asking Mo about the bombs. He’s too lost in his delusion. Carrie knows the only way to help Mo is to go in and make John remember what happened.

She uses her own experience to talk John into remembering. He remembered his friend had broken cover because John had complained over being thirsty. His friend had gotten water and that’s why he died. John had secretly been blaming himself all along. Only after he acknowledges that does he puts down his gun.

It was a sad case but after the risk she took it might very earn Carrie an award for valor. Silver lining!