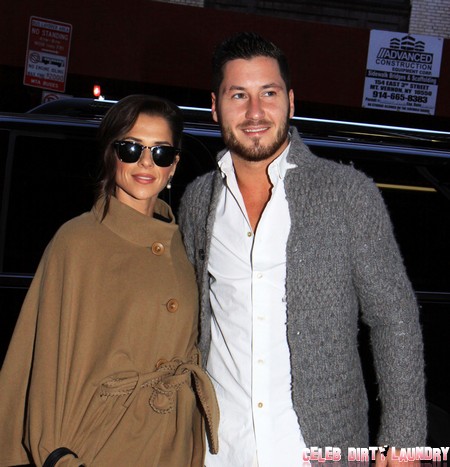 Val Chmerkoviskiy has denied that he’s dating his former Dancing With the Stars partner Kelly Monaco, despite rumors that the duo were dating. You’d see where they’d have trouble, considering that the two were involved in a pretty steamy public kiss in the semi-finals of DWTS. However, Val tells Teen Scene exclusively that he’s not dating Kelly, and he is in fact, single! When asked about what he would pick as his relationship status on Facebook, Val says, “It’s pretty single. It’s not complicated at all. Not complicated, I’m not in a relationship. I’m single.” He also talks about what he looks for in a girl, saying, “I look for confidence, but at the same time class. I think arrogance comes from insecurity so I want a girl that’s secure, and that’s motivated, who could laugh at herself, laugh at me I’m sure..”

Don’t look for Val to find that in his latest DWTS partner, Disney star Zendaya Coleman, considering that he is 26 years old and she’s still only 16. However, Val dishes to Teen Scene about their DWTS partnership, which is one of the biggest pairings of this season, considering Val’s popularity and fame in the dance world, and Zendaya’s Disney stardom. Val first talks about his rehearsal sessions with Zendaya, saying, “It’s good. The most crucial things when it comes to getting anything done is your attitude and your ambition, and your discipline, and she’s got those things. She’s going to be awesome.”

He does mention Kelly and the disappointment from the previous season, saying, “No, I think all the pressure is off. I really feel like I proved myself… to myself. I was very proud of Kelly, and proud of us. It was a huge accomplishment for both of us. Going back to Dancing with the Stars I’m very excited and really, really happy with my partner, Zendaya.”

Val seems like one of the few DWTS contestants who’s got his head screwed on straight, and he and Zendaya are already a popular choice for voters, with fans dubbing them ‘Team Valdaya’. Of course, they also have the skills to back up their fans’ adoration, and we’ll get to see them in action as this season of Dancing with the Stars continues.