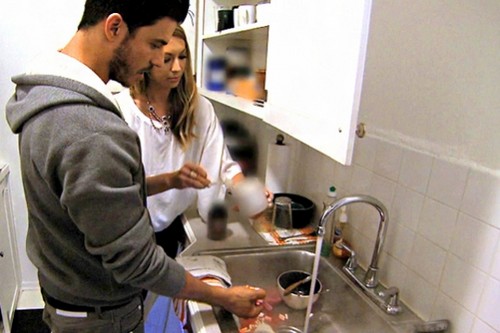 Tonight on Bravo VANDERPUMP RULES continues with a new episode called, “Surlesque.”  On tonight’s episode the girls perform a sexy dance for Guillermo’s birthday, while Kristen fights the rumors about Tom and a new bartender.  .  Did you watch last week’s show?  We did and we recapped it right here for you.

On last week’s show when Stassi found out about Jax’s sexy photo shoot with a female model, she questioned whether she could trust him enough to ever love him again. Just when Kristen’s work life and love life appeared to be back on track, Lisa brought in a sexy female bartender who might have a romantic past with Tom.

On tonight’s show Lisa enlists Stassi and Katie to perform a sexy dance at Guillermo’s surprise burlesque birthday party. Jax is confronted with a health scare but receives scorn instead of sympathy from Stassi. Then, Kristen picks a fight to stop the gossiping about Tom and the new bartender.

Tonight’s episode is going to be another drama packed one, which you won’t want to miss. So be sure to tune in for our live coverage of Bravos’ Vanderpump Rules Season 2 episode 5— tonight at 10PM EST! While you wait for our recap, hit the comments and let us know how excited you are about the new episode of VR tonight and check out the sneak peek video below of tonight’s episode!

Vanderpump Rules starts off tonight with Stassi and Katie at Sur, meeting with Nathalie. Nathalie is planning a surprise birthday party for Guillermo and she wants them to do a Burlesque dance at the party. Nathalie has some professional Burlesque dancers come in to Sur to help Katie and Stassi plan the party. Lisa comes in to check on them and gives them some pointers on how to be “sexy” for Guillermo. They have some creative differences because Lisa wants the girls to wear pasties, but Nathalie doesn’t want them to be so revealing.

Ariana is officially an employee at Sur, Scheana is showing her around and introducing her to the servers. Scheana is excited that she finally has a co-worker that can stand to be around her.

Kristen and Stassi are picking out an outfit for Kristen to wear to get her passport photo taken. This is her first passport, so she wants the picture to be perfect. While they are going through Kristen’s clothes Stassi receives a phone call from Jax. He is in the hospital and scared, he has a lump on his chest and it hurts. Stassi and Kristen are concerned, they think it is from all of the protein shakes that he drinks.

Lisa, Scheana, and Nathalie are at the bakery picking out a birthday cake for Guillermo’s birthday party. Scheana wants to look at wedding cakes, even though she isn’t engaged, but Lisa doesn’t let her.

Ariana and Tom are shopping together, ironically they are discussing the rumors about them hooking up (shopping together is probably not the best way to squash those rumors).

Jax is home from the hospital, and Stassi stops over at his apartment to check on him. She brought him a cake that says “no more supplements.” Jax needs an intervention. Stassi cleans out his cupboards and dumps all his protein powders and steroids out in the sink. Jax is upset that she isn’t being sympathetic, and not a fan of her “tough love” approach. They end up arguing…as usual…and Stassi storms out.

Jax pays Schwartz and Tom a visit and announces he has cancer. They don’t believe him. He admits that he doesn’t know if it is really cancer, he is waiting for test results. He tells them about Stassi attacking him the day he got out of the hospital. He thinks she is heartless.

Stassi, Kristen, and Katie, and the rest of the servers are getting their hair and makeup done for their Burlesque party. Scheana arrives, and she is upset, she doesn’t want to wear the costumes, or the intense makeup.

Meanwhile the Burlesque party planners are trying to hit on Jax at the bar. Stassi watches from across the room, and is shocked that Jax isn’t paying any attention to them.

Kristen sees Dani, and calls her out for spreading rumors about Tom. Dani doesn’t back down though, she is insistent that Tom and Ariana have a “weird chemistry.” Kristen tells her to “get a f-ing life.”

Guillermo arrives at Sur, and the surprise birthday party was a success, he was obviously surprised. They present him with his cake in the shape of a boustierre and Katie and Stassi do their Burlesque dance for him.

Lisa asks Jax why he is wearing a shirt, he was supposed to be topless for the Burlesque party, He reveals that he has a lump on his chest, and it is sensitive, so he doesn’t want to take his shirt off. Lisa feels bad for him, she goes and finds Stassi and tells her to be more sympathetic to him, because he is obviously scared and not feeling well.

Stassi takes Jax outside and apologizes to him for flipping out on him the day he got out of the hospital. He reveals that the Dr. called him and told him they still can’t confirm whether it is or isn’t cancer. Stassi is still not showing him much sympathy, her cold-hearted behavior has made Jax realize that he doesn’t want to be with her anymore. He is tired of Stassi constantly putting him down.