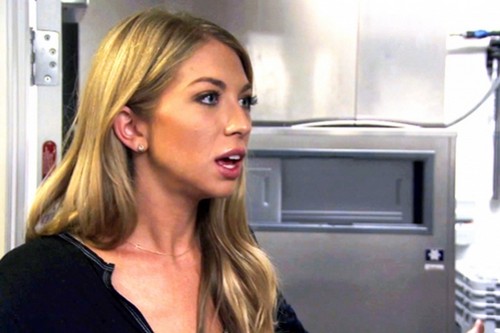 Tonight on Bravo VANDERPUMP RULES continues with a new episode called, “Rich People Annoy Me.”  On tonight’s episode a dinner with Lisa’s friends offers up drama at the dinner table and for the SUR staff — especially Kristen and Tom.t. Did you watch last week’s show?  We did and we recapped it right here for you.

On last week’s show after Katie revealed the rumor that Kristen slept with Jax, Stassi hatched an elaborate plan to trick them into confessing. Lisa hires a “secret diner” to evaluate the service at SUR, but the staff were more focused on rumors than customers.

On tonight’s show when The Real Housewives of Beverly Hills gather for a dinner party at SUR, Stassi and Jax witness firsthand that Lisa’s high-class friends can be just as spiteful and vicious as their own. Kristen’s obsession over rumors that Tom is hooking up with the pretty new bartender leads to a five-girl shouting match on the night of Lisa’s dinner.

Tonight’s episode is going to be another drama packed one, which you won’t want to miss. So be sure to tune in for our live coverage of Bravos’ Vanderpump Rules Season 2 episode 8— tonight at 10PM EST! While you wait for our recap, hit the comments and let us know how excited you are about the new episode of VR tonight and check out the sneak peek video below of tonight’s episode!

Tonight’s episode of Vanderpump Rules opens with Stassi, Jax, Peter, and Katie at a table at Sur for a meeting. Ariana and Tom arrive together. Then Lisa joins them and briefs them on an important dinner she has coming up at Sur. Tom feels a little uncomfortable around Jax, since Jax has been spreading rumors about him cheating on Kristen with Ariana.

After the meeting Jax approaches Tom and asks him “what is on his mind.” Tom calls him out about spreading rumors about him and Ariana. Jax completely denies the allegations and says those words never came out of his mouth. Tom sees through his bullshit though, he knows Jax is playing both sides.

Kristen heads outside with Stassi and Katie, and confesses to them that she has been going through Tom’s phone again. She is upset because she saw calls in his phone to Ariana.

Katie heads inside and confronts Jax and Tom. She tells Tom that Jax has been spreading rumors about him and Ariana. Jax completely denies that he ever said anything and calls Katie a liar.

Later that night Kristen approaches Tom and asks him why he called Ariana. He flips out on her and says, “Be my girlfriend or not, I’m done f—ing dealing with this.” Kristen storms out of Sur.

Scheana is doing her own thing, and recording new singles for her soundtrack that she plans on releasing soon. Her goal is to sound like Kesha, and she thinks her new soundtracks is going to be a hit.

Katie is hanging out at Stassi’s apartment, they are waiting for Kristen to arrive. Katie is planning to read them their futures with her Tarot cards. Kristen arrives, and Katie starts her reading. Kristen interrupts her and wants to talk about Tom and Ariana. Stassi thinks they have definitely hooked up because Scheana slipped up and said “I don’t know what happened between them in Vegas.” Katie continues with Kristen’s Tarot card reading. According to the cards, Kristen has a “false heart,” and her “joy is slowly dissipating.” According to the Tarot cards, Kristen’s future is full of “pain and tears.” Kristen confesses that even if Tom did sleep with Ariana she probably won’t leave him. Kristen is upset and storms out.

It’s the night of Lisa’s big dinner, she has invited some of her close friends. She preps Stassi before the dinner and tells her to keep Kristen away from her dinner and on the other side of the restaurant. Peter is concerned about Kristen, because she is already being difficult.
Tom and Ariana are preparing the bar for the dinner. Jax is making jokes about them “flirting too much.” Scheana is annoyed that she isn’t allowed to work the party because Brandi is coming, and she dated Brandi’s husband several years ago.

Meanwhile the restaurant is falling apart, and Kristen is outside sitting on the curb crying. Peter tries to get her to come back inside but she refuses. Peter heads inside and gives Lisa a heads up that Kristen is a mess. Lisa is concerned that Kristen is going to confront Ariana in front of her party.

Lisa’s friends have all arrived, she has a table of nine, including Brandi, Joyce, and Yolanda. Stassi takes their orders and is annoyed, they are all acting like they have their own personal chefs, and ordering extremely ridiculous plates of food. Stassi confesses to Katie that she is going to “kill me some rich bitches and steal their hand-bags.” Meanwhile “shit is hitting the fan” at Lisa’s dinner. Joyce and Brandi are going head to head, Brandi thinks Joyce is “stupid” and Joyce is still upset over her racist comments. Stassi is freaking out because she can’t serve them while they are arguing.

Their food is ready, and after all the work Stassi and the chef’s put into it, Lisa and her friends are too busy fighting to eat it. Stassi is scared “someone is going to get stabbed by a diamond.” Jax is super confused because he thinks Joyce is Latoya Jackson.

Meanwhile Kristen just realized that Tom and Ariana are bartending together at the private party. Kristen wants to barge in to the party and yell at Tom because he lied and said he was bartending with Jax, not Ariana. Stassi won’t let Kristen into the party, Tom leaves and heads outside with Kristen. She is freaking out on him, and “knows he slept with Ariana in Vegas.” Tom gets Scheana and brings her outside to prove to Kristen that he didn’t sleep with Ariana. Kristen doesn’t buy it. Lisa comes outside and tells Kristen to get it together. Lisa feels bad though, because she can tell that Kristen is truly heart-broken.

Scheana heads inside and tells Ariana that Kristen is on the war-path and thinks they hooked up three years ago in Vegas. Ariana heads outside with Scheana to approach Kristen. Ariana tells Kristen for the 100th time that she has never done anything with Tom. Kristen is a blubbering mess as usual, and insists Ariana is ruining her relationship, Ariana walks away from her.