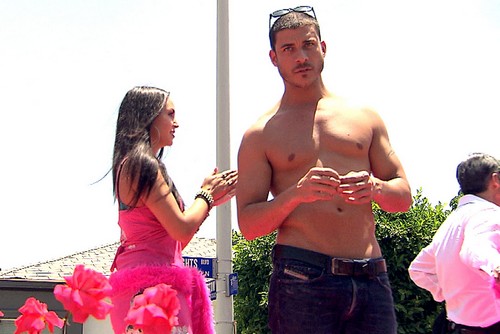 Tonight on Bravo VANDERPUMP RULES returns with a new episode called “This is a Break-Up.”  Vanderpump Rules follows the passionate, volatile and hot-and-bothered-staff at Lisa Vanderpump’s West Hollywood mainstay SUR. Lisa balances her motherly instincts and shrewd business sense to keep control over this wild group of employees as they pursue their dreams and each other while working at her “Sexy, Unique Restaurant.”

On last week’s show Lisa Vanderpump’s new hire for SUR, Scheana, was ostracized because of her past affair with a married man. Scheana’s co-worker, Stassi, the self-proclaimed “leader of the pack” led the charge against Scheana, labeling her a “homewrecker.” Eventually, Scheana, with Lisa’s encouragement, stood up to Stassi, serving notice that she was at the restaurant to stay.

On tonight’s show Lisa enlists the help of her SUR staff to celebrate Gay Pride with an over-the-top parade float, but when Stassi catches Scheana and Jax flirting, the fighting and fallout threaten to ruin the day. Jax desperately wants to get his relationship with Stassi back on track, but his drunken behavior at a SUR birthday party might be the final straw that ends his relationship with Stassi for good.

Tonight’s episode is going to be another drama packed one, which you won’t want to miss. So be sure to tune in for our live coverage of Bravos’ Vanderpump Rules Season 1 episode 2— tonight at 10PM EST! While you wait for our recap, hit the comments and let us know how excited you are about the new episode of VR tonight and check out the sneak peek video below of tonight’s premiere!

Tonight’s recap: Stassi is used to being spoiled rotten and her daddy has paid her way until she graduated college.,Now she’s on her own and has no money in the bank Add to that the fact that her relationship is pretty much in the toilet. Jax isn’t being responsible, according to her and she is picking up the tab for both of them. Lisa says she can’t prevent employees from being a couple but she can insist that they don’t bring their drama into Sur.

Stassi realizes things are bad when Jax chooses to sleep outside in his car rather than come inside and sleep in their apartment. She is insisting he start acting like a 33 year old man and grow up already.

It’s time for the Gay Pride Parade and Sur  has a float representing. Lisa’s biggest challenge of the day is trying to get everyone to stay sober. Frankly that is a nice departure from watching Stassi griping over Jax who is a decade older than her and supposedly much more immature. The thing is, she is the one that’s looking pretty childish rather than him.

Schaena is the chick that Eddie Cibrian cheated on Brandi Glanville with and Stassi hates her. That was even before Schaena decided to put suntan lotion on Jax. Now she’s losing her mind and calling her every name in the book. Lisa successfully breaks up another fight on parade day. It’s clear that Stassi and Jax can’t be anywhere together let alone work together. He is smart and fed up. He calls her insecure which of course makes her cry. He is over the constant drama with her.

Schaena decides that she wants to have a conversation with Stassi. Stassi wonders what to say to her, maybe something like “What’s up home wrecker!”. Obviously this chat is going to go great.  Schaena tries to apologize but Stassi cuts her off and corrects her on how to apologize. She is clearly an insecure little girl and this show isn’t going to last very long if she continues to be the focal point.

I feel like I’ve just watched a couple fight for an entire hour and I could care less because I don’t know who they are or why I should even care. Watching them argue doesn’t make me want to invest either.

Now Stassi and Jax are breaking up. Or she says that they are while he argues about it. Honestly all she does is rip him apart. I don’t know how they’ve lasted two years like this. Tune in next week to see what happens next.