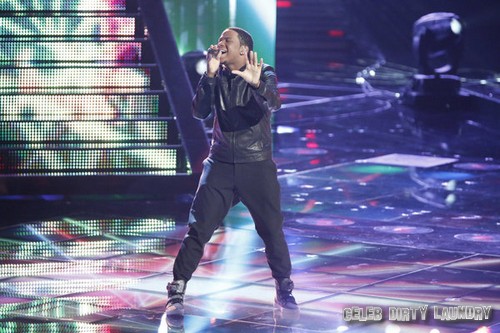 19-year-old Vedo from Atlanta, GA hit the stage last night on The Voice Top 12 performance show and sang his heart out.  Sadly, his Voice dream has come to an end and she was sent home on The Voice tonight.   Did you watch tonight’s show?  We did and we recapped it here for you.

Prior to auditioning for the voice Vedo was homeless and lived in a car with his mother.  For Vedos audition he sang Boyfriend by Justin Bieber and Usher was the sole judge who turned his chair for him.  Usher gave Vedo a standing ovation and said he turned his chair not only because of the song, but because of Vedo’s voice.

Vedo was up  first last night he sang “Rock With You” by Michael Jackson. During rehearsals he did very good and Usher reminded him that this was his make or break moment.

Here are what the judges had to say about his performance, “Shakira really thought the work with Usher paid off, he seems like a nice guy who leaves his heart on stage when he performs. Blake thinks the dancing didn’t affect his performance, it was awesome. Usher knows that a lot of hard work goes into singing and dancing together and VEDO did it tonight.”

Sound off your comments below and tells us what you think about Vedo’s Voice experience.  Do you think you Vedo should have been sent home?