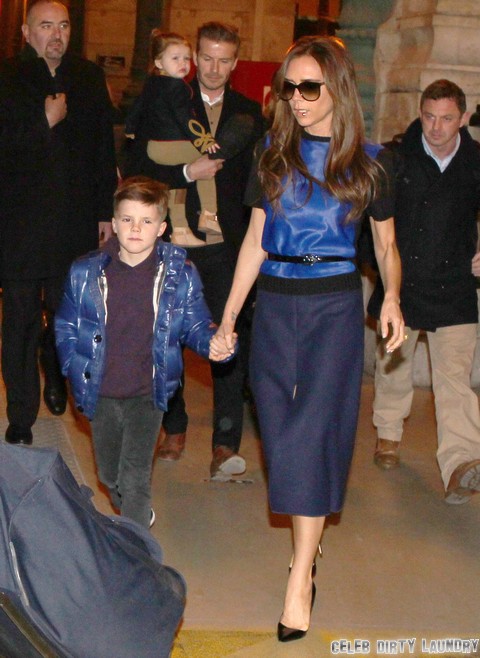 The youngest Beckham, baby girl Harper, is now 18 months old and it seems as though Victoria Beckham might be itching to add to her family of four.  She and David Beckham are already parents to 3 boys in addition to Harper – Brooklyn, 13, Romeo, 10, and Cruz, 7.

While Victoria was busy getting ready for New York Fashion week, she talked to the press a little bit about her life outside of design.  She discussed the family’s move back to London so David can play for a French soccer team.  Now that they are settled back in Europe, it seems as though Victoria is looking to the future, including plans to grow her business and possibly even their family.

There are rumors that the fashion icon is looking to expand her empire by possibly opening a Paris Boutique.  Could a “Paris baby” be in her plans also?  After giving birth to daughter Harper, maybe she is hoping for another girl and has convinced David that it’s time to try again.  With such an age gap between Harper and Cruz, perhaps Victoria feels like Harper needs a little brother or sister.

David and Victoria seem to be very hands-on parents.  Even with their busy careers, they are photographed at their children’s soccer games and out and about with them.  It’s obvious that they don’t rely solely on nannies to raise their children, so are they really ready for the sleepless nights and diapers all over again?  Is Victoria just suffering baby fever now that Harper is entering toddlerhood or does she really think it’s time to add to the Beckham clan?  What does David think about all this?  Seems like Victoria usually gets her way, so only time will tell.  With Victoria’s slim figure, it wouldn’t be easy to hide a baby bump for very long.