Victoria’s Secret has Decided they Love Kate Upton — After Shunning her for Years! 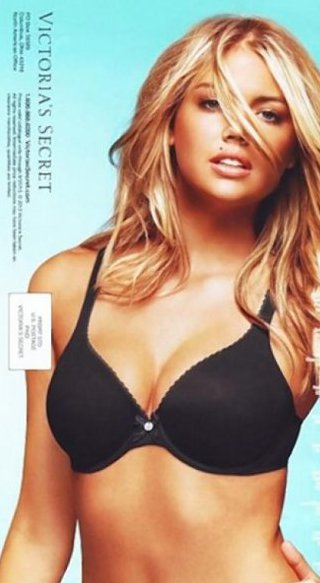 Has Victoria’s Secret had a change of heart about Kate Upton, a model who, just years ago, seemed to be flat out rejected by the famous women’s brand of under garments? Kate Upton was propelled to the international fame stage when she appeared on the cover of Sports Illustrated and had a brief feature in the Victoria’s Secret catalogue; however, despite her momentary Secret appearance, Victoria’s Secret casting agent, Sophia Neophitou, seemed to dismiss her relatively quickly in a 2012 famous NY Times interview — claiming Upton appeared “too everyday girl” (paraphrased). But now she’s featured on the back of their catalogue, and her pic is pretty prominent.

In the interview, Neophitou said:

“We would never use” Ms. Upton for a Victoria’s Secret show, Ms. Neophitou said by telephone last week from London. And, while Ms. Upton has, in fact, modeled on occasion for the company’s catalog, her look, said Ms. Neophitou, is “too obvious” to be featured in what has become the most widely viewed runway show in the world.

“She’s like a Page 3 girl,” Ms. Neophitou said, referring to the scantily clad voluptuous women featured in The Sun, a London tabloid. “She’s like a footballer’s wife, with the too-blond hair and that kind of face that anyone with enough money can go out and buy.”

Yikes, that seems a bit like a major burn if you ask me. Well, whatever Victoria’s Secret’s true feelings about Kate Upton were, they seemed to have changed a bit now. What are your thoughts on the matter? Do you think Kate Upton is a Victoria’s Secret dream girl? Let us know in the comments section below.