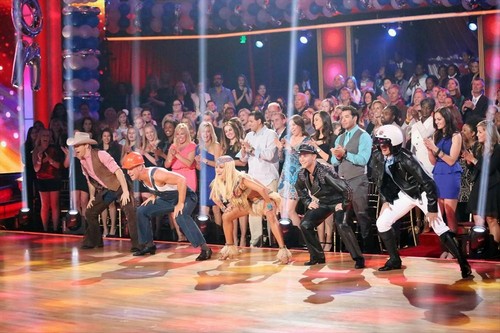 Tonight on ABC it’s the Dancing With The Stars 2013 second Result Show of Season 16 and we will say goodbye to one contestant tonight. On last night’s show the 11 contestants performed a mix of dances from the elegant Viennese Waltz, to the fast-paced Cha Cha and Jive, to a sexy Samba and Rumba, a fierce Paso Doble and a Contemporary dance.. Did you watch the show? We did and we recapped it here for you. Did you miss any of the performances? We have all the videos here for your enjoyment.

After last night’s performance at the top of the leaderboard is Kellie Pickler & Derek Hough who scored a 25/30 for their Jive.  Bruno said, ” Every movement was filled with precision.” At the bottom of the leaderboard is Wynonna Judd & Tony Dovolani  who scored 15/30 for their Samba.  Bruno said about their dance, “Oh no Wynonna, I was expecting a wild child.  You have to ride the Samba, it was a bit sedated.”  We conducted a poll today and 50.48% of viewers predict that Wynonna Judd will be the second celeb sent home tonight.  Unfortunately the cookie doesn’t necessarily crumble that way and we’ve seen high scoring couples take the fall alongside low scoring couples.  There is still time to vote in our poll, go HERE!

On tonight’s show one couple will be eliminated. The show will feature musical performances from singer-songwriter Demi Lovato and American pop rock band Huey Lewis & the News. Lovato’s new single, “Heart Attack,” off her upcoming untitled fourth album, has achieved Gold status in the U.S. and debuted at #1 on the iTunes chart in 18 countries. Huey and the boys, who had a string of hits in the 1980s, will perform their single, “The Heart of Rock & Roll,” accompanied by the DWTS troupe. And “Macy’s Stars of Dance” is back for its first installment of the season. Choreographed by Nick Florez and RJ Durell, the performance will feature spectacular mind-blowing stunts and eight of the hottest dancers working in the industry. Also on the results show, the male Pro and Troupe dancers perform a special routine.

Who do you think will be going home tonight?  We are predicting Wynonna Judd or  D.L. Hughley, but you never know!  Sound out in the comments below and let us know your thoughts!

DANCING WITH THE STARS ELIMINATIONS RESULTS – WHO WAS SENT HOME HERE!