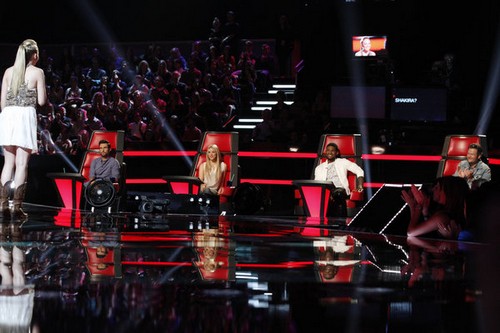 Tonight on NBC THE VOICE continues with a new episode and an elimination episode. On tonight’s double elimination show America will vote to eliminate another 2 artists and the remaining three contestants will move on to compete next week in the finale. Did you watch last night’s show? We did and we recapped it here for you!  If you missed any of the performances, we have all the VIDEOS here for your enjoyment!

Just five artists remain on The Voice Season 4: Danielle Bradbery, Amber Carrington, Sasha Allen, Michelle Chamuel and The Swon Brothers. Last night the artists laid it all on the line in a head-to-head singing battle.   The remaining artists performed two songs, one they chose and one their coach chose.  There were some memorable performances in front of coaches Shakira, Adam Levine, Usher and Blake Shelton as the artists vied for America’s vote and a chance to move on to the finale and one step closer to winning the crown.

We conducted a poll today and 45,83% of our viewers think Amber Carrington will be sent home tonight. 36.11% think it will be Sasha Allen followed by Michelle Chamuel with 6.94% of the votes. If you have not voted in our poll there is still time, GO HERE!

On tonight’s live result show America will vote to eliminate one artist and the remaining three will move on to the next phase of the competition, the finale.  Fallout Boy and a trio of former contestants will all perform. Fallout Boy will do their hit single “My Songs Know What You Did in the Dark (Light ‘Em Up).”   It will also feature a performance by Adam Levine’s season 2 finalist (and Christina Aguilera’s former Mickey Mouse Club buddy) Tony Lucca. He will be debuting his new single “Never Going to Let You Go.”

The Top 5 did so well they had record voting.  Tonight’s show is kicking off with the Fall Out Boys Performing and Michelle Chamuel joining them.  The song they are performing is “My Songs Know What You Did in the Dark (Light ‘Em Up)”

We are going to start with the first person who is safe and made it into the finale.  The first person is from Team Usher and it is Michelle Chamuel.

Next we are treated to a performance by season 2’s Team Adam’s Tony Lucca debuting his new single “Never Going to Let You Go.”

The five finalists are performing, “Every Rose has A Forum.”

The second finalist is announced from Team Blake, Danielle Bradbery.

Next we have a performance by Team Blake’s Terry McDermott.

The last finalist moving into the finale is The Swon Brothers.