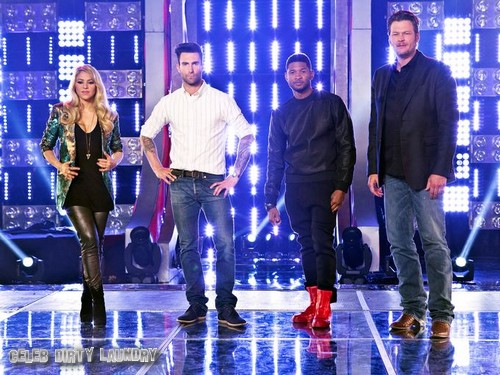 Let’s see how all the singers did last night before we give you our poll to vote in:  Before we start the review of last night, our vote for the best performance of the evening was 16 year old Danielle Bradbery.  At 16, she is one of the most confident and carefree singers. Adam said it best,  “Every 16-year-olds’ dream is to sing like that.”

Holly Tucker sang an old country gospel classic, “How Great Thou Art”.  Usher thought it was an incredible statement to make and there is no bad way to perform a religious song, however this was a different shift and a departure of what he expected from her vocally.

Judith Hill sang Michael Jackson’s “The Way You Make Me Feel.”  She sang the song because she knew Michael Jackson and Adam said people would accept it and know that she was celebrating someone that she loved and respected.

The Swon Brothers sang “How Country Feels” by Randy Houser.  Usher loved their song choice and always loves what they sing.

Sasha Allen sang “Next To Me” and it has a lot of soul to it. Shakira thought the song was right up Sasha’s alley, so did Cee Lo Green who was there to help mentor her. Adam thought it was great, hewas happy she did this song, it was a really fantastic job.

Josiah Hawley sang Clocks” by Cold Play, Usher thought this was Josiah’s moment. Shakira thought he did a great job, this is a tough one though, when it comes to Cold Play they have such a distinguishing sound, it’s almost like mission impossible but she felt that Josiah did a good attempt. Blake thinks Josiah set the bar high last week and this song had a lot of holes in it.

Danielle Bradbery sang “Heads Carolina, Tails California” by Jo Dee Messina.  Adam thought it was crazy, Danielle is such a superstar and every sixteen year old’s dream, it’s astonishing. Blake could go on and on about Danielle, she is amazing, the performance was carefree and she solidly delivered.

Kris Thomas is the only male R&B singer left and he sang “Adorn” by Miguel.  Usher thought that Kris was thinking a lot and he thought Kris could have chosen a better song.

Sarah Simmons sang “Momma Knows Best” by Jessee J.  Adam praised Sarah because she deserved it. Adam was fanning himself, he thought Sarah was awesome.  He thought it was the performance of the night.

Closing out the night is Team Usher’s Michelle Chamuel “Just Give Me A Reason” by Pink.  Blake loved how dramatic Michelle is when she performs, it is amazing. Usher thinks this was the performance of the night.