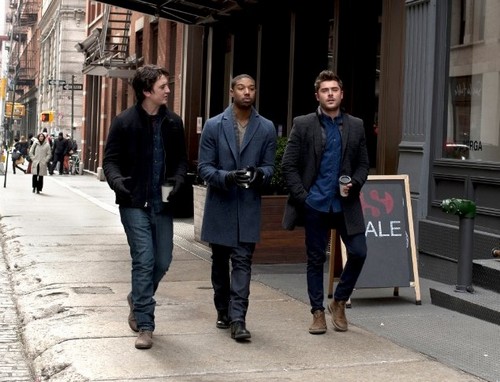 My how the squeaky-clean have fallen!  Disney’s High School Musical star Zac Efron was always considered to be  squeaky-clean.  That was, until news broke earlier this month that he had a stint in rehab for drug abuse.  Today the trailer for his new movie That Awkward Moment has been released and Zac appears buck naked.  I warn you ladies it is NSFW, Goodbye Mr. Disney, Hello Mr. Hot!

In the trailer for the movie one of the scenes goes down like this, Zac’s character and his pals take some Viagra and drink lots of alcohol.  Problem is, just when the Viagra starts to work, Mother Nature calls, so how do you pee?  Here is where the NSFW starts, Zac gets a great idea of how to do it, he lies over the toilet (kinda planking) and he is completely naked (and toned), except for his crotch which is over the toilet.

In another scene Zac tries to get a girl he likes to notice him, so he heads over to a dress-up party she is at.  Zac walks into the party with a t-shirt that says, “Rock on” and a giant sex toy hanging from his waist.  The awkward moment is, he thought it was a costume party but it was a formal attire party and he gets to meet her parents dressed in his costume.  Can you say awkward??

That Awkward Moment stars Zac Efron, Miles Teller and Michael B. Jordan and it hits theaters in the USA January 31st, 2014.