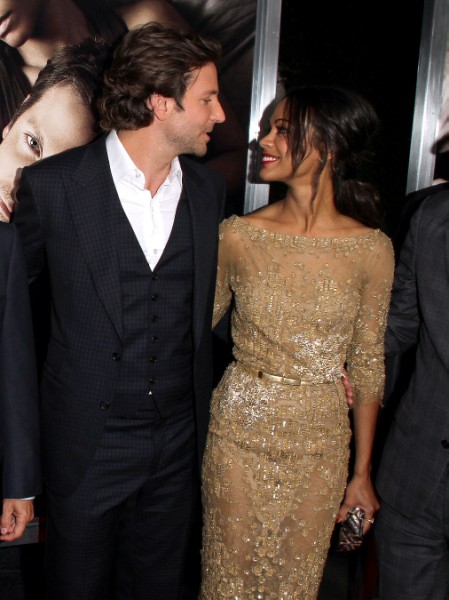 Zoe Saldana has been all over the place lately pimping the new Star Trek film so we’re getting some good interviews from her. More importantly, we’re getting great fashion but that’s another story for another day. She’s also hyping up her role in the new Nina Simone biopic and hasn’t been shy about addressing the fact that there are a lot of haters out there because she had to darker her skin color for the role. She recently defended herself saying something like if Elizabeth Taylor can play Cleopatra than she can play Nina Simone. I’m more meh about the whole thing because Zoe’s not a singer and it would have been cool to try to get someone who could have given that a shot. But, whatever, that’s not what this post is about since in Allure magazine, Zoe Saldana practically told people she got down with the ladies sometimes, that’s all people want to talk about.

She told Allure that she might end of raising children with a woman and remained coy when asked if she’d ever been in a relationship with a chick. She didn’t just remain coy, she demanded the magazine make her look coy too. “Has she had a relationship with another woman? She deliberates, then says, ‘Promise me one thing: You’re going to ask this question [in the article]—if you choose to, just put three dots as my response. That’s it.'”

Allrighty then. So is she bi or a lesbian? Zoe Saldana used to go back and forth with Bradley Cooper so she must be bi. I could care less. There’s a lot of bearding going on in Hollywood. This certainly won’t help Bradley out though. There are a lot of rumors about his sexuality that never seem to want to go away. I have no idea one way or the other. He’s with the Suki what’s her face now. Maybe Bradley was bearding for her? Maybe nothing fishy was going on and they were truly a couple? But when has a Hollywood relationship ever been that cut and dry?