BY Amanda Austin on May 20, 2014 | Comments: one comment
Related : Reality TV, Recap, Television, The Duggars 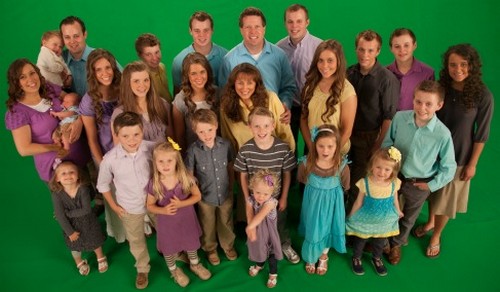 Tonight on TLC 19 Kids and Counting returns with another new episode. On tonight’s episode “Something New” Josh and Anna go skiing with Jana and Joseph; Michelle attends Joy Anna’s violin lesson; Jessa and Jinger visit Ben’s house, where his sisters teach Jessa how to cook his favorite meal.

On the last episode with a few days left in their trip, Jill & Jim Bob made the most of their time. While Jill volunteered at a birth center, Derick took Jim Bob for a traditional Nepali shave. As the trip came to an end, Derick had a surprise for Jill. What was it?  Did you watch last week’s episode?  If you missed it we have a full and detailed recap, right here for you.

On tonight’s episode Jessa and Jinger head to Ben’s house, where his sisters teach Jessa how to cook his favorite meal. In DC, Josh & Anna, along with Jana and Joseph, embark on a skiing trip. Michelle spends time with Joy Anna as she tries her hand at the violin.

Tonight’s episode of 19 Kids And Counting kicks off with Michelle Duggar getting a violin lesson from her daughter Joy Anna. Her favorite song is “Amazing Grace” so Joy is trying to teach her since Joy has been playing the violin for thirteen years. Even though Michelle isn’t very good, Joy still had fun spending time with her.

All of the kids gather in the living-room to discuss the dinner theater that they are planning to put on for their parents. Some of the kids filmed a movie they plan to show, a few of them are singing and putting on a skit, and the rest of them are making the food.

Jessa is heading over to Ben’s (the boy she is courting) house to spend time with his sisters and learn how to cook his favorite foods. Jinger is tagging along to chaperone, and she is very nervous because she has never chaperoned before.

At Josh and Anna’s house, Jana and Joseph have come to visit. Jana plays with their three kids while Anna fixes them breakfast.

Jessa and Jinger arrive at Ben’s house and he is at work, they head to the kitchen with his two sisters and get to work. They are teaching Jessa how to make fettuccini Alfredo and an apple pie for desert.

Josh, Anna, Joseph, Jana and Josh’s three kids all head to the ski resort. Anna has never skied before, and can barely stay on her feet. Joseph and Josh head straight to the slopes together, because they have been skiing before.

At Ben’s house his sisters are still in the kitchen with Jessa and Jinger. They warn Jessa that her future husband has a serious snoring problem.

On the skiing trip Jana takes the kids inside, and Anna and Josh go on a skiing date. After falling off the lift, Anna makes it to the bigger slope. And she falls over 20 times before she makes it down to the bottom of the slope.

At the Seewald house Ben arrives home from work with a dozen roses and surprises Jessa. Ben thinks the girls “did amazing on the meal” and “the apple pie was out of this world.”

The second episode of 19 Kids And Counting begins with Jana and Jill heading to the birthing center, they are both training to become midwives and Jill’s client Amanda is in labor. Over the past three years Jill has assisted during over 1,000 hours of labor. They put Amanda in the bath tub to relax her more, and she delivers a healthy baby girl.

Michelle and Jim Bob head to a high risk pregnancy doctor’s office to see if Michelle is healthy enough to have another baby. Michelle is 48 years old, and the doctor informs her that the chance of her getting pregnant is slim and less than 5%. If for some reason she does wind up pregnant there is a ¼ chance that the baby could be born with a birth defect like down syndrome. Michelle takes a blood test to see if she is in menopause and can no longer have children.

Ben arrives at the Duggar house to pick up Jessa and Jinger, they are going to Washington DC to visit Josh and Anna. Once again Jinger is chaperoning Ben and Jessa. She doesn’t mind though because she thinks it is sweet to watch Ben and Jessa together. They arrive at Josh and Anna’s and Josh immediately begins questioning Ben about his intentions with Jessa.

In the morning Ben and Josh head to the gym to work out together and get to know each other. Josh once again begins questioning Ben. Ben reveals to Josh that he and Jessa tell each other that the love each other. Overall Ben is confident that he passed Josh’s test. Afterwards, Josh, Anna and the kids take Jinger, Jessa, and Ben on a trolley ride to tour DC and the monuments.

Josh enjoyed his trip to DC and seeing all the monuments with his own eyes, but his favorite part of the trip was he got to spend it with Jessa.