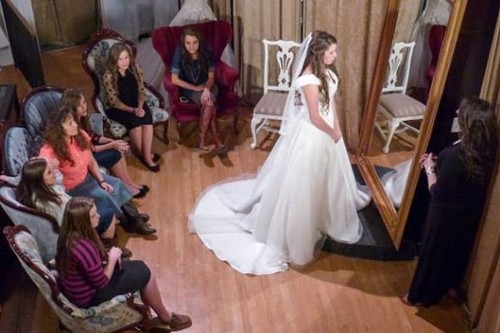 On the last episode, Jill went shopping for a wedding dress on a trip to Washington, D.C., with her mom and a few of her sisters. Meanwhile, back in Arkansas, Derick and Ben went camping with Jim Bob and John-David.

On tonight’s episodes the oldest Duggar girls share some sisterly time trying out hair & makeup for Jill’s upcoming nuptials. Then, they’re off to search for the perfect bridesmaid attire. Can Jill find a bridesmaids dress that fits her vintage feel while staying modest? Also Jill and the girls go look for the perfect wedding shoes for her bridesmaids. Meanwhile, Josh & Anna make a very special “Duggar” wedding gift. And Jim Bob and the boys tackle laying down the carpet for the newlywed’s first home.

Jill is getting married and soon there won’t be any time left for the sisters to enjoy some of their old quality time together. So using the wedding preparations as an excuse – the sister enjoyed one last Girls Day. They tend not to frequent hair salons but because of the occasion they decided to go to one in order to have a trial run for how they want their hair to look at the wedding. And though it was a new experience, they each ended up loving their new hairstyles.

Funnily enough, most of the sisters chose to go with the same hairstyle. A half-up half-down do and after they had worked out what looked best on them they then proceeded to go try on bridesmaid’s dresses. Their mom, Michelle, joined them in the dress shopping and as we all know she favors the more conservative look. Luckily, that goes with Jill’s theme.

Jill is looking for something to pass off as shabby chic. And she doesn’t need to find the exact kind of look she wants because one of her sisters happen to be a really good seamstress and will alter whatever dress that comes close to Jill’s vision. Which is what she had to do when they found a nice cheap dress but it needed sleeves and some added length.

Then there was Anna. She’s also going to be part of the wedding party but she chose to stay behind with her family and miss out on the Girls’ Day. Lately her family hasn’t been eating as healthy as they should so Josh’s former trainer surprised them all by making a quick visit.

Steve had told the family where they’ve been going wrong since he and Josh stopped working together – all the fried foods and their lack of vegetables in the house needed to be fixed. So Anna tried to get her family back on track yet she ran into a problem that all mothers face. How do you get kids to each their vegetables? As it turns out it wasn’t so hard to convince her kids to eat a healthy snack as long as it was on stick. Though a regular sit-down meal still was a trial for the family.

There was tears and the baby had begun throwing the asparagus after it tasting it only once!

[10:01:49 PM] Kristine Francis: In part two of tonight’s episode, the reality of the wedding is finally starting to hit a few people. And it all came about because they needed new shoes. The boys though didn’t want to join their mom and sister on a shoe expedition. The younger ones believe shopping is for girls.

And to be fair the girls did enjoy their trip. They went to Famous Footwear and the super store was able to appeal to all of their interests at the same time. The girls each found a sandal they liked and the younger ones even found just the right amount of sparkles to please themselves with.

The only one that hadn’t bought shoes was the bride herself. From early on Jill had decided that she was going to go barefoot down the aisle. It’s been a dream of hers and she thinks it’s cool so the bride gets what she wants.

In the meantime, her brothers were helping readying the house for her and her future husband while also increasing the value of the house. One way in which they did this was to add some carpet and make it more of a child friendly home. Jim Bob does want to sell this house as fast as possible. And if that means his daughter and her new husband might have to move in with him then he’s willing to accept that.

As for the house and the tasks he assigned to his sons, Jim Bob not only wanted to lay out carpet in the rooms but he also wanted to teach his kids to be self-sufficient. So the carpet thing ended up taking much longer than anyone anticipated because the boys kept messing up and needing help. But, thankfully, it was all taken in good fun and the job was carried out despite the initial setbacks.

The boys wanted to do that for their sister and Josh and Anna was also thinking about Jill’s wedding when they decided to make a baby gift their wedding gift. They assume it won’t be long before Jill is pregnant so they wanted to create something to both symbolize Jill and Derrick’s past and their future.

Yet during the planning, their own kids started to get excited about a baby. And so Anna is hoping they’re not getting it into their heads that another baby just for them will be super fun. She’s happy with the three she has now!