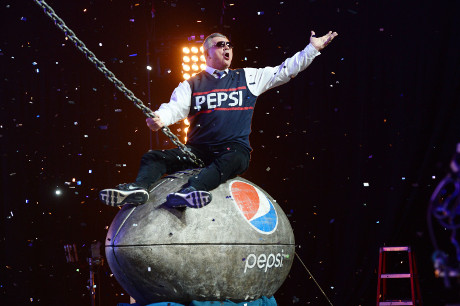 The 56th Annual Grammy Awards rocked it tonight and we loved seeing some of our favorite performers take home the awards they so greatly deserved. If you missed all the Grammy action, including the red carpet styles, be sure to check out our coverage of tonight’s telecast (CLICK HERE). While tonight’s show was, of course, a time to celebrate people’s incredible accomplishments in the music industry, halfway through the broadcast Pepsi gave fans an intermission featuring NFL legends Deion Sanders, Mike Ditka, Terry Bradshaw, and Shannon Sharpe.

The fun halftime show was produced with the hopes of getting football fans pumped up for the upcoming Super Bowl Halftime Show, which is sponsored by Pepsi. The video spoofs 2013’s most talked about, tweeted, and parodied music moments in only 2.5 minutes. If you want to see how ALL THE THINGS can be spoofed in only a short amount of time — and get a few good laughs out of the deal — then be sure to check out Pepsi’s hilarious video below.

In addition to checking out the video below, also peruse some of the awesome pictures, which feature a fantastic rendition of Miley Cyrus’s iconic “Wrecking Ball” — easily one of the most talked about and iconic images of the past year. Again, if you missed all the hot 2014 Grammy Awards action, be sure to check out our full coverage by clicking here!