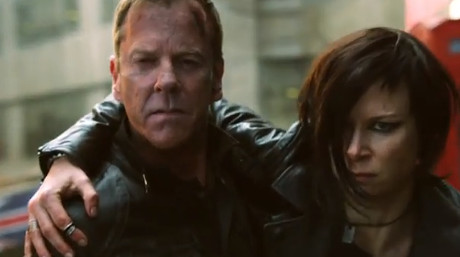 In case you still haven’t gotten over the end of 24, featuring one of TV’s most brooding international crime fighters, well, you’re pain can soon come to an end because Jack Bauer will soon be returning to your television set. The new trailer for 24: Live Another Day debuted during the 2014 Super Bowl and, while the clip doesn’t fully elaborate on the 12-episode plot, it does set the stage for another explosive, adrenaline-filled journey of badassery.

The promo trailer brings together again Jack Bauer (Kiefer Sutherland) and Chloe O’Brien (Mary Lynn Rajskub). When the clip opens it’s obvious they’re in London and things, needless to say, aren’t all tea and crumpets. In fact, things seem downright awful. But, honestly, Jack Bauer’s middle name is danger and, more likely than not, he’ll find away to save the world — of course he will!

The show: “Jack Bauer comes out of hiding in London to head off a massive terrorist attack while being hunted down by American forces dispatched by President James Heller.” Once again, Jack will be running for his life while at the same time trying to stop massive terrorist attacks. Let’s just hope he doesn’t ever have to bend down to tie his shoes because, from the sound of things, he’s not even going to have time to consume a meal without danger peering over his shoulder.

Let us know in the comments section below if you’re looking forward to the return of 24. The show will premiere on FOX, the network that fostered the household name, on May 5th.