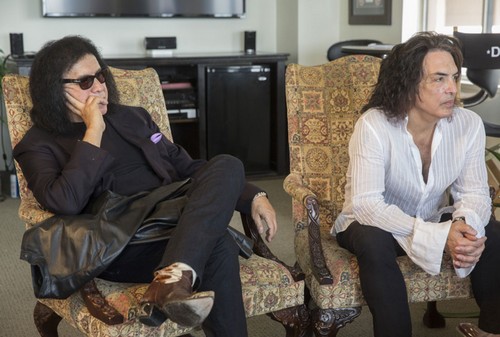 AMC’s brand new series 4th and Loud premieres tonight, this episode is called “A New Arena” this evening owners and staff of the LA KISS discuss marketing the brand and seek a roster.

For those of you who are not familiar with the show, it will follow team owners Paul Stanley and Gene Simmons of KISS fame, along with additional owners, long-time KISS manager, Doc McGhee, managing partner/owner, Brett Bouchy, and president/owner, Schuyler Hoversten, as they and the dedicated players and coaches work to turn LA’s first professional football team in years into a winning franchise.

On tonight’s episode, following the debut season of the Arena Football League’s LA KISS opens with a first look at rockers-turned-team owners Paul Stanley and Gene Simmons and their staff.

Tonight’s 4th and Loud season 1 premiere episode is going to be great and you won’t want to miss it. So be sure to tune in for our live coverage of 4th and Loud — tonight at 9PM EST! While you wait for our recap, hit the comments and let us know how excited you are about this new series,  4th and Loud. While you wait for the show, check out a sneak peek of tonight’s episode below!

For over 40 years, the legendary band KISS redefined Rock ‘N Roll but now some members of the group have set their sights on moving away from the music and entering the field of AFL Football. From the looks of it, it’s not an easy transition yet Paul Stanley and Gene Simmons appear to want to take on the task despite the risks. And in case you’re wondering there are many risks!

Entering the Arena Football League alone cost some humbling on the stars’ part. First off, they had to appeal to the AFL who have recently come under stricter guide lines after running into problems less than a decade ago. And though it’s easy to make promises to the league such as “we’ll win championships” and “we’ll raise the profile of the entire league” it’s quite another to actually live up to that promise.

Turning their team LA KISS into a winning franchise isn’t going to be as easy as say selling out arenas for a KISS concert. Most of the hot shots football players have already been snatched up and tied to multi-year contracts so from the very start – so the team has to look for players in what’s considered the leftovers. Or worse the bottom of the barrel. Like team members that have suffered injury in the past. Take Colt Brenan, he’s extremely talented but at the end of the day the coaches have to figure out if his brain injury is going to hold him back.

Officially, Colt passed their physical and yet the team doctor doesn’t sign off on him until they hear back from Colt’s neurologist. Now if they want to ignore that – they can seeing as they have paperwork on their side. But in doing so they might also risk a player dying on the field so rather than the coaches attempt to figure it out themselves – they brought in one of the team owners to make a decision.

The team owners hired professionals (well qualified professionals) to build their team and besides that they seem to have dropped the ball with everything else. The coaches don’t have all the equipment they need and the team owners are busy designing team outfits. So, naturally, the main coach in charge is hoping his bosses get their act together else they shouldn’t expect him to build a winning team.

Coach agreed to be the acting coach as long as he had complete control of the football side. And he was granted that chance. Then his players didn’t have essential equipment like helmets nor was he given enough money to purchase anything additional. So when he called a meeting with Brett Bouchy – he thought he would be in the right to make demands and sadly for him he then learned he nearly put the whole team at risk.

The managing partner heard back from Colt’s doctor and he was surprised that Colt hadn’t passed his physical yet though the coaches have kept him on at the training camp in spite of that. The coach said he did that in order to have enough time to asses Colt’s abilities. And that meant he was only going to ask Colt to throw a ball but none of that matter to the partners. Because want would be the point of even looking at Colt if he has a disability. They can’t just overlook that to hire a star player – it’s their money that’s on the line after all and they don’t want to be sued!

So Colt was benched and slowly other people were forced to go home depending on the capabilities while he had to watch from the sidelines.

Eventually the day came for the official first cuts and because of a freak storm – most of the players were denied a final chance to impress the coaches. So they’ll most likely be sent home and as for Colt. The doctors came back with their decision and the partners have decided he’s too risky to take on. They want to let him go but Colt wants to find a way where he can still remain on the team and is willing to do just about anything even if it means not physically playing.