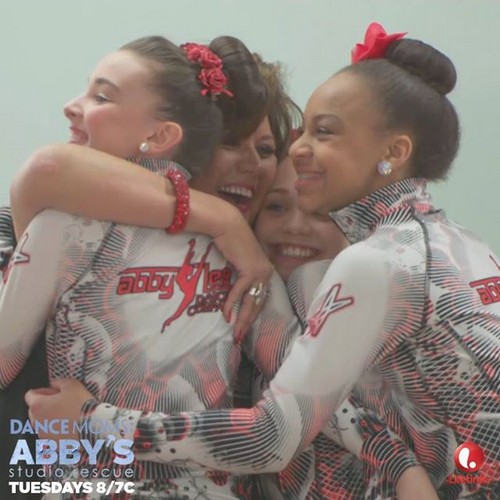 Tonight on Lifetime Abby Miller’s Abby’s Studio Rescue returns with an all new Tuesday September 16, Season 1 episode 3 called, “Delusions of Dance Grandeur.” Abby visits a dance studio in Shelton, Conn., where the owner is in total denial about the problems at her studio. Abby enlists the help of Maddie, Mackenzie, Kendall and Nia from “Dance Moms” to show the owner the error of her ways.

On the last episode before the hiatus Abby headed to Indiana, and found a dance studio whose owner was neglecting the other kids to focus on her own daughter, the star dancer… but was she actually hurting her daughter by keeping her at the studio, instead of allowing her to pursue her career?  If you missed the episode we have a full and detailed recap, right here for you.

On tonight’s episode Abby arrives in Shelton, CT, and finds a studio owner in total denial about the problems at her studio. Abby enlists the help of Maddie, Mackenzie, Kendall and Nia from “Dance Moms” to show her the error of her ways, but are the problems at the studio too great for her to overcome?

On tonight’s episode, Abby might have met her match (with mouths if not talent) in Debbie. The dance studio That’s Showbiz has recently fallen on hard times. However it used to be quite a large studio. Sadly, the problems came after the senior dancers all graduated. They were the ones paying majority of the tuition that went towards to the upkeep and since then Debbie has been left with only a handful of younger kids.

That is how Debbie introduced herself to Abby. As a down on her luck business owner. And yet the truth doesn’t look nor sound anything like these obvious fabrications!

First off, Debbie probably would have been able to recruit more kids if there was only a problem with her teaching. She really can’t teach to save her life, but add in her denial and often scheming behavior then she isn’t exactly winning any friends among the dance moms sect.

And when Abby came to town to help, she figured out pretty quickly that Debbie’s business was about to go under. Although, the fault doesn’t lie with the supposedly “evil” landlord (who allegedly overcharges her on rent) or necessarily with the children. The problem is Debbie. Debbie’s studio is a mess and yet Debbie is charging the parents a lot of money. Way more than Abby would ever charge. Though at the end of the day Debbie is very shady about where the money is going. It’s not going to maintenance and Debbie hasn’t hired a real choreographer.

She claims to be on the brink of bankruptcy and meanwhile she hides things from the dance mom that’s actually trying to helping her with the books. Her main excuse usually is that she can “handle it”. But handle what?

Nevertheless, despite any personal misgivings, Abby still wanted to help turn this studio around. So she sat in on the children practicing and it was just embarrassing. The kids don’t know the proper techniques they should know and that’s because of their teacher. If she can be call that! Abby gave Debbie one of the tests her dancers would have to take upon auditioning and Debbie was clueless.

Not only did she not know techniques but she started to hate on Abby for pointing out her problems in front of her clients. Afterwards she was even insulting Abby in order to mask her own incompetence.

Though did Abby leave after this? No, she did not. Abby surprisingly stayed on and continued to assist Debbie. Plus she knew the kids needed some proper instruction for once and so she brought in her own people. That way the students at That’s Showbiz could get the chance to see how the dance should be done and not what Debbie has been telling them was correct.

Abby’s choreographers took over and Abby renovated Debbie’s studio. So now it looks like a real studio and not a safety hazard pretending to be one. As for the landlord, Abby also dealt with him too. In dealing with him personally, Abby found out that Debbie could easily pay her rent if she wanted to. The problem is, again, Debbie herself.

She takes most of the money she earns and goes shopping with it. She says it helps with her stress. Then later wen Abby had Debbie make out checks to her landlord in advance – Debbie wasn’t really comfortable about that. Sometimes she just doesn’t feel like paying him and was only willing to do so when she was in the mood.

By time Debbie’s kids went to their showcase, the kids had all improved. The only person that hadn’t was Debbie. She refused to listen to Abby’s sound advice or take responsibility for her previous actions. So later she cancelled all the checks Abby had made her sign and her landlord is currently trying to evict her.

Don’t feel sorry for her – Debbie did that to herself!