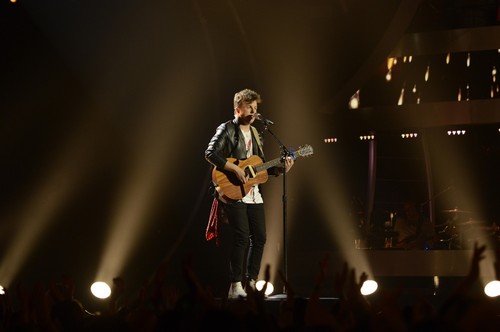 Alex Preston sang, “Don’t Speak”  by No Doubt for his song choice for the “(I’m With The) BAND!”– themed performance show.  The IDOL hopefuls will act as the lead singer for Rickey Minor and his band, performing their favorite songs.  Did you watch tonight’s performance show?  Just in case you missed tonight’s show we have you covered and you can read our full and detailed recap here!

On last week’s episode Alex sang “Story of My Life” by one direction and Harry loved his rendition saying,  “You know when you go to amusement parks and they have those water pistols and you shoot, well to me you just hit the bullseye on the artistry target.  You have so artistic with your artistic choices I think I am beginning to know who you are.  You are leading the pack on that one.”