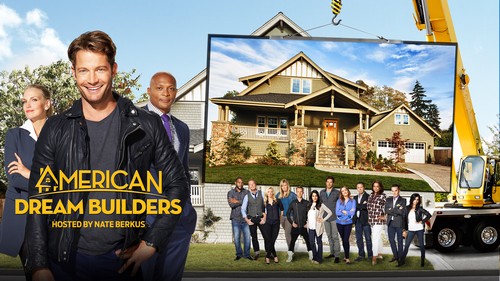 American Dream Builders returns to NBC tonight for its finale. In “Beach Home,” Season 1 ends with the final two designers each taking on the renovation of a beach home in Ventura, Cal., in hopes of winning the grand prize of $250,000.

On last week’s episode  the competition was at an all-time high with the finale just one week away. The remaining four designers had to renovate a Victorian home together. Site manager Jay had his hands full keeping his team all on the same page. To their surprise, the contestants met their neighborhood council for the first time. However, this surprise was minimal compared to the twist they are given by the judges. Two designers were sent home.

On tonight’s episode after nine weeks and 19 renovations, the final two designers meet their final challenge. In their biggest renovation to date, they must transform two dream beach homes in Ventura, Calif. Luckily, they won’t have to go at it alone. They are reunited with a few surprise guests to help them. One designer will win the grand prize of $250,000 and be crowned as the first American Dream Builder. Nate Berkus hosts while Eddie George and Monica Pedersen serve as judges.

Will you be watching American Dream Builders on NBC tonight at 8PM EST? We will be recapping it live for you right here so check back in later. In the meantime hit up the comments and tell us your thoughts on this season so far!

In the season finale of American Dream Builders, the last two contestants – Jay and Lukas – were asked as their final challenge to complete the largest renovation to date. However they weren’t left with this daunting task all on their own. They were surprised to find some old friends had returned to help.

Former contestants over this last season returned to assist the guys into transforming two dream beach homes on sunnier side of California. But, and it’s careful to note, some of the returnees weren’t always the best to work with. If anyone can recall, Elaine had gained something of a reputation when last we saw her. She was considered somewhat of a sabotaging bitch. So there weren’t any streamers or balloons to welcome her back with.

She ended up on poor Lukas’s team. While the older and more experienced (with children) Jay could have probably handled her with an adapt hand – Lukas nearly cracked underneath the unnecessary strain she gave him. First there was the last minute shopping trip. They did this to pick up anything remaining and yet Elaine basically rode rough shod over the other team members. It’s not her renovation and instead of arguing that point the other ladies that were supposed to be helping her out – looked for ways to escape her.

It had gotten so bad that Nina, another former contestant, thought Elaine secretly wanted Jay to win. And she might be correct with that assumption even if she was merely a joking at the time. Elaine told Lukas in the final hours of renovation that he hadn’t grown in his work.

She told him that the judges were looking for growth and that Lukas is kind of doing the same old thing over and over again. Though why would she say that so close to wrapping up the project is anyone’s guess. It had Lukas rethinking his choices and it brought down some of his self-confidence.

By time the big reveal came, Lukas was seriously undermined. The only thing that was able to turn it all around for him was the other bombshells the judges had in store for the contestants. Before the house could be viewed in front of everyone – the judges reunited the final two with their families. It’s been weeks since Jay has seen his children or Lukas has been reunited with other blondes. So it was nice to be able to show off in front of loved ones.

Though some sour notes tend to be right around the corner of something good. Take for the instance the way the judges changed the rules at the last minute. The judges have informed the contestants that this last challenged will not be judged by the Neighborhood Counsel. The counsel along with families will be allowed to view the house, but the final decision on who won will come down to three people and their decisions.

The judges left everyone to view Lukas’s house as they went to Jay’s. And they liked what they saw. Jay’s house had a lot of appeal to it and except for a few pieces that just were too out there – it felt like a home. Although Nate had to wonder – was Jay capable of doing all of this on his own or were his “extra” hands responsible for pulling the whole thing together. Monica and Eddie on the other hand were thankfully less skeptical.

Jay started off in this competition as the underdog and so to have come this far is truly testimony for his work. But will it be enough? Do the judges want to reward someone who’s grown or someone who has been consistently good?

Still, the thing with Lukas’s house is that he painted it black. It’s a beach house and he painted it fully black. There wasn’t even any lightened trim to help the austerity of the color. So Lukas came really close to losing this competition without the judges ever taking a peek inside. What saved him was that they did go in and ended up falling in love with his décor.

Nate and Monica were like excited children. As for Eddie, he didn’t think the house was meant for practical living. He felt like some aspects of it were meant for looking purposes only. He found Jay’s house to be a lot warmer.

When it came time for the panel to give their critique – they were honest. They loved both houses. The difference though was that everyone had agreed that they hated the house being painted black and they were still confused on whether or not Jay could have handled everything on his own. And so they asked the former contestants on who should win.

They like Jay and they feel like he is a good designer, but there was nothing in his house that he did all on his own. He had the most help and Lukas had the most vision. Most of the designers (Elaine’s answer was a bit confusing) chose Lukas simply for the fact that they know what he can do!

And the same went for the judges. They ended up choosing Lukas as the first winner for American Dream Builder because he’s good and they don’t have to second guess that. He’s innovative and manages to live up to all that he promises.

So congratulations Lukas! You worked hard for it!