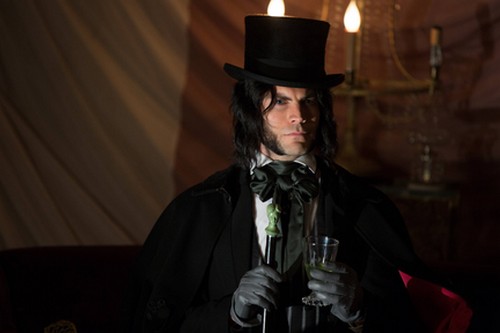 In the last episode the Freaks refused to perform on Halloween due to an old carny superstition. Jimmy was smitten by a woman claiming to be a fortuneteller. Ethel received life-changing news. Did you watch the last episode? If you missed it, we have a full and detailed recap right here for you.

On tonight’s show, Edward Mordrake continues his search for a Freak to add to his ghostly coterie. Elsa tells the grisly story of her days in Germany. Jimmy and Maggie have a run-in with the Twisted Clown.

Edward Mordrake continues visiting the freaks in the compound, and he declares that he’s looking for one more “pure freak” to add to his unhappy number. He visits the Illustrated Seal and the Half Woman and asks for their stories. By the time they finish their stories, he says that they are not the ones and moves on to visit Elsa.

When he arrives to chat with Elsa, she begins on about how she’s surrounded by such awful talent. Edward says that he’s not here to talk about her alleged talent but that he’s here to take someone away with him. He and his spirit freaks push her onto the bed and rip off her prosthetic legs. She’s crying, near hysterics, saying she’s not one of them — meaning she doesn’t consider herself to be a freak. Edward says, “Now, tell us about your darkest hour.”

Esmerelda and Jimmy are riding back to the circus when the motorbike runs out of gas. He says they need to get off the road before they get caught. She says that she’s not sure about him yet and is reluctant to go anywhere further with him — especially into the dark woods. A car comes down the road and, without much time to think, they retreat into the dark bushes.

The girl Twisty has captured says to the new boy that she won’t die here. She manages to get away and runs onto the road where Jimmy and Esmerelda are hiding. Twisty chases after the girl. He captures her again and pulls her back into the worlds. Jimmy chases after them, hoping to help in some way.

Wiemer Republic 1932: Elsa tells Edward about her time working in the sex industry. Though she wasn’t a normal prostitute, and she quickly garnered a reputation of the person to go to when you wanted something “creative” done to you — something crazy and, perhaps, painful. She says that, over time, she began to attract an audience, people who wanted to observe these sexual deviancies. She began calling them “The Watchers.”

Edward says he doesn’t want to hear of this. He wants to know about her legs — how she lost them.

Jimmy and Esmerelda are attacked by someone in a clown costume. Dandy takes off his mask and says it’s time for the real Halloween show to begin.

Hotel Olympia 1932: Shes says she began to make videos for people, and one day she was the subject of a disturbing one. While filming, men cut off her legs with a chainsaw. She says that she was saved by a soldier boy, someone who followed her around everywhere. She says that she was a star as the video began making its rounds but that her career as a singer was over. She was made an outcast. The demon of Edward Mordrake says that she’s the one. As she begs and begs and begs for him to kill her, to take her, he stops. He hears music. Edward asks, “Do you hear music?”

Meanwhile, we cut to Dandy and Twisty in the woods, where they have their children tied up and putting “on a show.” Jimmy manages to get out of his ties for a bit and smash Dandy in the head. Twisty claps. Some of the kids manage to get away. Edward shows up. He says, “Don’t stop. I’ve come for a show.”

Esmerelda managed to help the boy and girl get away. Esmerelda tries to trick Dandy. She leads him further into the words.

Meanwhile, Twisty is sitting around the campfire. Edward commands for him to take off his mask and tell him his story. Twisty does and reveals that he has no mandible, so he can’t produce speech. Edward says to focus his mind and he will understand. Soon, Twisty’s speech becomes intelligible and we begin to see his story.

We’re taken back to Twisty’s past, where we see that he was wrongly accused of being a child molester by the other carnival freaks. Soon, we learn that Twisty’s horrible disfigurement was the result of a failed suicide attempt. He explains that he did everything for the children and doesn’t admit to any wrong doing. When Edward finishes listening to his story, Edward reveals that he’s met many a killer in his day — many people who’ve had cravings for death. He says that all of them have in some form have admitted to the darkness in their hearts. Edward says that he has caused the Demon to weep. Edward chooses Twisty as his newest addition and kills him with his dagger. As spirits, they drift into the night.

Dandy returns to the camp ground, only to find Twisty’s dead body. Dandy bends down and picks up Twisty’s mask. He puts it on. Meanwhile, Jimmy is trapped in the van. Cops siren sound. Dandy runs off.

Esmerelda is being questioned by the cops, as is Jimmy.

The two return to the freakshow. Esmerelda tells Elsa that Jimmy caught the killer. Elsa says that they had a visitor last night. Jimmy says he knows: Edward Mordrake. Jimmy tells Elsa that he claimed his freak.

Soon, the entire town comes to thank Jimmy for saving them all. Elsa welcomes them all to purchase tickets at the box office.

Esmerelda’s accomplice shows up for the show later that night, and he’s disguised himself as a talent scout from Hollywood. Of course, Elsa jumps on this and welcomes with with great joy to tonight’s show.