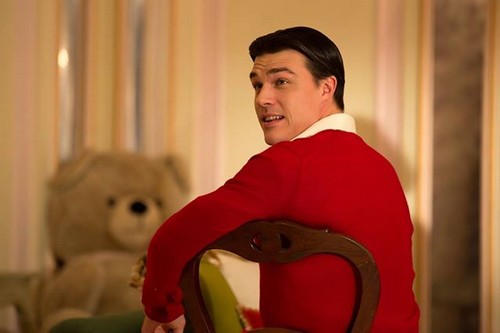 Tonight on FX our favorite creepy drama American Horror Story: Freak Show starring Jessica Lange and Kathy Bates continues tonight with an all new Wednesday December 10, season 4 episode 9 called “Tupperware Party Massacre,” and we have your weekly recap below. On tonight’s episode, In the wake of a tragic loss, Jimmy [Evan Peters] sinks into a drunken despair.

On the last episode, recent disappearances around camp rose Ethel’s suspicion of Elsa. Gloria made a last ditch effort to contain Dandy’s bloodlust. Written by Ryan Murphy; directed by Bradley Buecker. Did you watch the last episode? If you missed it, we have a full and detailed recap right here for you.

On tonight’s episode as per the FX synopsis, “In the wake of a tragic loss, Jimmy sinks into a drunken despair. A reading from Maggie spurs Dandy to action.”

Dandy visits Maggie for a “reading.” She says that she thinks she recognizes his voice. We see a flashback of what Dandy has been up to since murdering his mother. We see that he’s made a puppet out of his mother and another one of his mother’s friends.

Once Maggie finishes up, Dandy gives her a hundred dollars.

Meanwhile, Jimmy is drunk and feeding Ima Wiggles pudding. He seems to be smitten with her — and incredibly intoxicated.

Dandy leaves the circus. As he’s doing so, Jimmy runs up to him and accuses him of being the second clown. Dandy gets a whiff of Jimmy’s breath. As Dandy shakes off Jimmy’s accusations, the other freaks leave. Jimmy throws a punch at Dandy, who easily dodges it. Dandy bends down and tells Jimmy that he plans to make his life miserable — until everyone and everything he loves has been eradicated.

Elsa and Stanley find the twins at the spot where Ethel hid them away. Stanley and Elsa found the info in Ethel’s suicide node. Dot is curious as to how they found her. Bette and Dot don’t trust Elsa much. Elsa says that she has the surgeon who’s separated conjoined twins on his way down right now.

Maggie and Desiree walk in on Jimmy, drunk as all get out, having sex with Ima.

Later, Jimmy performs his “services” at a Tupperware party with the ladies/clients. He’s still drunk. When he stumbles out of the bedroom and into the living room, he has a vision of Ethel. She tells him he needs to get over himself and stop grieving. The lady tells him it’s time for him to leave. Soon after, Dandy shows up at the door and asks to use the house’s phone because his “car has broken down.” The ladies welcome inside the ever charming Dandy.

Stanley and Elsa take the twins to a shacky barn on the outskirts of town. They return to the circus; Elsa is already apprehensive about encouraging the twins to go through with the surgery. But Stanley tells her it’s the only way — it’ll be a win-win situation. When they tell the twins what’s going to happen, how they will be separated, Bette freaks out. Dot, however, wants this surgery very much.

Meanwhile, one of the Tupperware ladies’ husbands returns home. He finds all the women slaughtered and floating in a pool.

Dandy is at home preparing his bath. He dumps in a small bowl of fresh blood. Regina walks in and says that she’s called the cops regarding her missing mother. Dandy, very nonchalantly, laughs and says that he killed his mother. She tries to leave but he rushes to the door and traps her inside his playroom. He tells her that he loves killing — loves having control over peoples’ lives — and that it’s his destiny to do this work. He tells her to get in the bath with him. She says she wants to leave now. Surprisingly, he lets her. As she does, he screams, “I am ABOVE THE LAW!”

Dot and Bette talk more about this surgery. Bette says that everyone thinks she’s the dumb one, but she pays attention. She knows only one person can survive. Eventually, she says that she would like to sacrifice her life if it meant that Dot could have a full and normal one.

Dell tries to write a letter to Desiree. He tears out the page. Next, he tries to write one to Jimmy. He tears that out next. Finally, he addresses one to “His son.” He’s drinking and very drunk.

Later, Dell’s leaving the camp. Stanley goes after him and reveals to him that he’s also a freak — with a rather large member.

Dell’s about to hang himself. He sees Ethel. She talks to him about how he’s really a weak man, always has been, and how he wears his shame on the inside — whereas all the other freaks are forced to wear theirs on the outside.

He goes through with it. But just as he’s about to die, Desiree comes in and cuts the noose.

Regina shows up on Dandy’s porch with a detective. Dandy goes on and one about what he’s done and says that he has money and power. The detective tells Dandy that he better stop talking, as he’s digging himself a hole. Dandy says, “How about you dig a hole for her,” pointing to Regina, “and I’ll pay you a million dollars.” Without a second thought, the detective shoots and kills Regina.

Jimmy stumbles through camp. Still, he’s drunk. He’s attached to the bottle. He goes into a trailer only to find Bette and Dot there. Dot says that they were about to do something horrible — but that they’ve decided not to go through with the separation. Dot also reveals her love for Jimmy. She offers herself to him. Jimmy is touched — however, he says that he’s in love with someone else.

The police come for Jimmy soon after. They charge him with killing the ladies at the Tupperware party.